March 06, 2013
In the Program Book for the Coronation of His Majesty Sultan Haji Hassanal Bolkiah as the 29th Sultan and Yang Di-Pertuan of Brunei Darussalam on 1st August 1968, there were two treaties obtained from the Public Record Office London. One was signed by Sultan Jalilulazam of Sulu appointing Baron de Overbeck as Dato Bendahara and Raja Sandakan dated 22nd January 1878.
This is the treaty which caused all the current issues in Lahad Datu currently:- 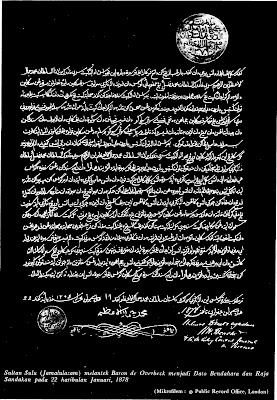 However we do have another treaty in that same program book signed by Sultan Abdul Momin, the 24th Sultan of Brunei appointing the same Baron de Overbeck as the Maharaja of Sabah, Raja Gaya and Raja Sandakan signed 29th December 1877. Three week before the above treaty was signed. 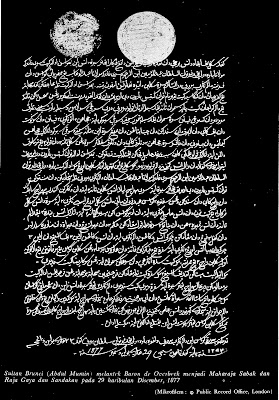 When Sultan Abdul Momin signed the treaty, he clearly believed that Sabah was within his control and was never ceded despite the claim of historians, otherwise he wouldn't have been making those appointments. Even when you studied Sultan Abdul Momin's appointment, his is more grand. He appointed Baron de Overbeck as Maharaja Sabah (Overlord of Sabah) and Raja Gaya and Raja Sandakan. Whereas the Sultan Sulu's appointment was limited to Raja Sandakan and Dato Bendahara. The first question to ask is did Brunei cede Sabah to Sulu?

One British historian has studied this and published in his book 'The Origins of British Borneo' published by Hong Kong University Press in 1970. L.R. Wright wrote: