July 16, 2010
I wrote an article about medals and awards and honours and this was published on my column on Brunei Times on Monday. All this while, awards and honours have not featured in my life compared to my colleagues who have been gathering them by the handful. Ironically on that Monday morning, I received a letter from the Grand Chamberlain telling me that His Majesty had kindly consented to give me the award of Darjah Seri Setia Brunei Darjah Ketiga SNB. This was my first big award after about 23 years in the service of His Majesty. The last time I received an award was a medal, the PIKB (the Pingat Indah Kerja Baik or Meritorious Service Medal) in 2001. I have two other medals, both commemorative, one is the Pingat Jubli Perak, this was handed out for work done during the 25th Anniversary of His Majesty's ascencion to the throne in 1992 and the other medal is the 25th Anniversary of the National Day in 2009 and this was because I was in the National Committee.

Here is a photograph of the Ministry of Development's Senior Officials who received the SNB, there were eight of us. In the photograph are Haji Wahab (Head of IMU), Haji Jamil (Surveyor General), Me, Haji Md Zin (Acting PS), Marzuke (Director of Housing Development) and Haji Suhaimi (Director General PWD). Not in the photo are Haji Zakaria (Director of Envivronment) and Hajah Marhani (Acting Deputy Director General PWD). 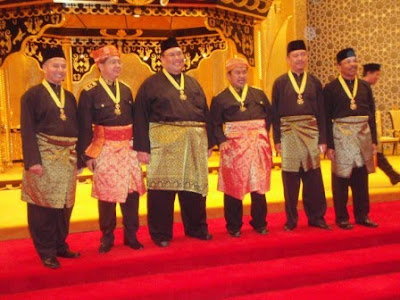 Here is that article on awards and honours as published in Brunei Times on Monday:-

There are still many people who do not know how the titles of Pengiran Cheterias or Pehin Menteris are awarded. Some even confusing them with the awards of Orders and Decorations handed out annually by His Majesty The Sultan and Yang Di-Pertuan of Brunei Darussalam during his Birthday Celebrations. Many confused them with the Malaysian system.

In Malaysia, an award made by the Federal Government, may entitled one to be called a Tun or a Tan Sri. For instance, an award of the Order of Seri Maharaja Mangku Negara, First Class will entitled one to be called a Tun and carry the designation of SMN behind one’s name. An award of the Second Class of the same Order allows one to carry the title Tan Sri and a PMN. An award of the Order of Seri Setia Malaysia, First Class also carries a Tun and an SSM; a Second Class carries a Tan Sri and a PSM. For the ladies, the titles they carry would be Tun and Tan Sri if the awards are to themselves but Toh Puan and Puan Sri, if their husbands are the recipients.

Malaysian states also award their own Orders and Decorations. However most of these would only allow the recipients the title Dato, Datuk or the various Datukships. Sarawak has an award which is the Order of the Satria Bintang Sarawak (SBS) which allows one to carry the title Pehin Sri.

In Brunei, the titles of any Pengiran Cheterias or Pehin Manteris are not awarded through the annual award. The titles are conferred to the recipients in special ceremonies and usually these ceremonies are carried out once every several years. The awards are very special and only those fully deserving to serve His Majesty will be awarded a title.

Indeed, in a few days time, His Majesty will indeed by awarding Orders and Decorations of which a lucky few will be entitled to carry the title of Datoship with some of them.

The Brunei Birthday Honours is similar to the British Birthday Honours given by the Queen. The honours system is a means of rewarding the citizens and other individuals for their personal bravery, achievement, or service to the country. The system consists of three types of award: honours, decorations and medals:

• Decorations tend to be used to recognise specific deeds;

• Medals are used to recognise bravery, long and / or valuable service and / or good conduct.

Historically, it is not known when the first honours and titles were awarded. But certainly by the 14th century, when the Brunei Sultans were already reigning in Brunei, titles and presumably honours were already in place. The Sultan was at the top of a pyramid of officials with wazirs and cheterias as well as pehin manteris assisting him. Titles must have been given to lower officials who assisted them including the title of Dato.

Each category has several classes. It is the first (Grand Commander) and second class (Knight Commander) of each category which will give the title Dato.

However for being awarded the decoration or bintang kebesaran, the recipients in addition to the title in front of their names, if any, will also get to keep the letters behind their names. The list of different categories of Orders, the classes in each Order, the letters to be used at the end of one’s name and the titles, if any (to be used in front of the recipients’ names), associated with that class:-

It is possible to get even higher and higher orders. The title that will be used will be the highest one that the recipient received. Normally the lowest decoration order government officers get will be the PSB and for religious officers the PUB.

So, hopefully in a few days time, if you are watching on television or reading the news of His Majesty handing out the awards, this writer hopes that this article can be used as a guide and offers his heartiest congratulations to those receiving an award.

Gembo said…
Tahniah on the award bestowed upon you by His Majesty The Sultan.