August 19, 2007
[Note: The following article was published in The Golden Legacy column of Brunei Darussalam's national newspaper, The Brunei Times, on 23rd June 2007]

As one of the ancient kingdoms of the Malay archipelago, Brunei's historical legacy is long and can be comparable or if not exceeding that of other better known empires in the region.

Among others, its strategic geographical location and well sheltered harbour has made it a safe place for ships that ply their trade in the Southeast Asian region from as early as the 6th Century.

Brunei had been known by many names in the past.

In the Chinese historic annals, Brunei had been written about as far back as 1,500 years ago in the Liang Dynasty (502 to 566 AD).

Then the Brunei predecessor state of Poli sent tributes to the Chinese bearing the produce of the country.

During those years, the name Poni had also been spelled as Bu-ni, Fo-ni, Po-ni and Po-lo.

It was recorded that the King of Po-lo had sent a mission to China in 669 AD.

The differences of the names are said to be caused by the changes of the Chinese dynasties, each preferring its own way of spelling.

The Arabs however called Brunei by other names including that of Sribuza.

It was believed that around the 7th century, Brunei was captured by members of the royal family of Funan who in turn had fled when their own kingdom was attacked by Chenla, another historical empire.

The captured Brunei was renamed Vijayapura which the Chinese referred to as Fo-shih-pu-lo and the Arabs rendered it as Sribuza but would have been pronounced in the tenth century as Srivijaya. 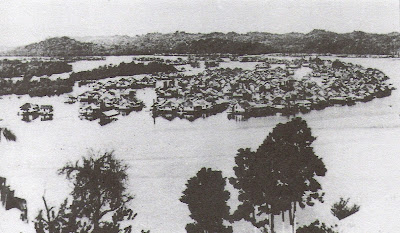 When did Brunei became Brunei?

According to the local historians as well as transmitted through the centuries and narrated in Syaer Awang Semaun, Brunei’s legendary epic poem, the name Brunei came about when it was discovered.

A group of 14 brothers led by Pateh Berbai and 90 dayaks went in search of a new place to live.

Then they were living in the present Temburong district area called Garang.

They landed at a place called Burit at the Brunei River and found that the place seemed to be the most suitable as it was flanked by hills with ample water supply and the river abundant with fish.

When they found the place, it was said that they exclaimed ‘baru nah!’ which loosely translated into ‘now we found it’.

Pateh Berbai then said,
We entered into the country of Brunei River
With a total of ninety in number
All of them were Sakai.

They rowed up the river,
And caught a lot of sharks and rays,
Pateh looked left and right,
For a good place to rest and open a country.

To Damang Sari, Awang Alak says,
After looking left and right with Pateh,
If Awangku agrees with me,
In Brunei we shall build a country.

Each member of the group set up his own house on the Brunei river and eventually more people came to stay there.

It was said that ‘baru nah’ over time became Brunei.

The move and the change in name was said to correspond to Chinese records of the Ming Dynasty (1368 to 1643 AD).

It can be summarized that the move to the Brunei river and changing the name to Brunei took place around that time.

However the Europeans called Brunei as Borneo.

Hugh Low in 1848 wrote: “… the name Borneo, by which the island has always been distinguished on European charts, and which was probably applied to it by the Portuguese from information received prior to any of their visits to the island, is a corruption of the word Bruni, the name of a kingdom and town on the N.W. Coast of the island – Bruni being called by the inhabitants of the Malay Peninsula …”

In another writing in 1812 by a J. Hunt, he says: “… Borneo was the name only of a city, the capital of one of the three distinct kingdoms in the island, ……. The natives pronounce Borneo, Bruni, and say that it is derived from the word ‘Brani’, courageous …”

However, if one is to trace through history, it is possible that the word Brunei could have come from other sources.

J.R. Hipkins wrote in 1971, that the word Brunei is said to have come from the Sanskrit word ‘Bhurni’ which means land or country.

Brunei could have been called ‘Karpuradvipa’ which means camphor land as camphor was one export which Brunei was well known for in the ancient days.

One J.H. Moor writing in 1871 noted that the Sanskrit word ‘Varunai’ means ‘seaborn’ – again another characteristic of the Bruneian of old – seafarers, mariners and living on water (Kampong Ayer).

Interestingly enough, one Leon de Rosny writing in Paris in 1861 noted that when the ‘Po-ni’ characters were transposed into Japanese Hira-Kana script, Po-ni became ‘Borneu’ or ‘Bornerei’. 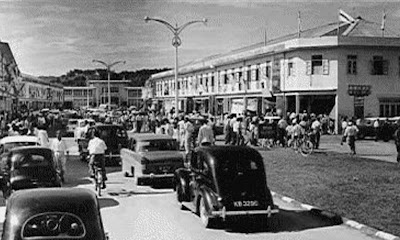 It was said that the word Darussalam was used by the third Sultan of Brunei, Sultan Sharif Ali which is the Arabic word ‘abode of peace’.

However, according to Groenvelt writing in 1960 that in the Ming Shih, it was said that Emperor Yung-lo conferred upon the mountain range (Kinabalu) behind Po-ni the title of ‘Mountain of Lasting Tranquility’.

Anonymous said…
hi mr. BR, i read this book but i forgot its title because it was really a long time ago since i read it, i think it was by a european historian. it sed the origin of the name "Brunei" deprived from the sanskrit word "Varunai" meaning literally "Sea People" or "Water People"....cud this be true?
Monday, August 20, 2007 3:42:00 PM

Rozan Yunos said…
The Sanskrit word 'Varunai' does mean 'seaborn' or 'sea people'. Whether Brunei is derived from Varunai, as the historians say - that is something that was lost in the mist of times. We will never know where the word Brunei originated from. There are many theories.
Monday, August 20, 2007 5:05:00 PM