The Brunei Fort at Kinarut, Sabah

April 05, 2007
I was in Kuala Belait yesterday, and my brother-in-law who used to be the Chairman of KB/Seria Municipal Council told me that there is a road called Jalan Dakula in Seria. Dakula is the name of Sultan Hakkul Abdul Mubin's son who was raised by the Suluks in the Philippines/Sabah when his expecting mother was captured during the battle at Pulau Cermin. A grown up Datu Dakula came back to Brunei seeking revenge for his father's death.

I was quite intrigued that someone would name two places in Kuala Belait/Seria after historical events that occur with has relationship to Brunei's events in Sabah. Istana Manggalela, the palace in Kuala Belait was also named after another event in Sabah when a Bruneian noble held out against the British using the Manggalela Fort in Beaufort, Sabah.

There is another old Brunei fort in Kinarut Sabah about 10 miles away from Kota Kinabalu. This was the fort that was built by Sultan Hakkul Abdul Mubin when he retreated from Pulau Cermin during the Civil War. From here with the assistance of the local Bajaus and Dusuns he managed to repel attacks from Sultan Muhiyiddin even killing a few of Sultan Muhiyiddin's Cheterias before returning and losing the final battle at Pulau Cermin. The fort is strategically placed on top of a hill with two rivers flowing beside it and a view that can oversee a few small island in the South China Sea. The fort was so good that Sultan Hakkul Abdul Mubin stayed for about 10 years becoming the Sultan in Kinarut where he among others also managed to curtail piracy activities in that area. 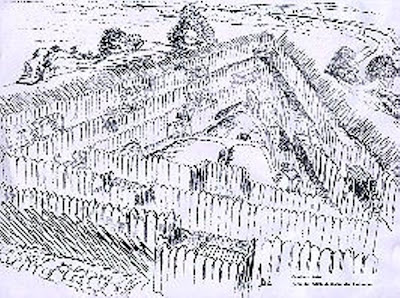 According to a research done by the Sabah Museum, the fort used to be walled with steps leading from the fort all the way to the bottom of the hill. It was made out of clay and gravel and the buildings made out of bambbo and other local wood. The hill was also known as Belud Kota and is situated facing the town of Kinarut.

Kinarut itself is an old town used by the Brunei Sultanate. Some said that the name of the town was derived when Chinese traders used to sell coal along the streets and the street was called China Road and over time becomes Kinarut. Though this is very unlikely as when Sultan Hakkul Abdul Mubin came to Kinarut was in the late 17th century. But what is very likely that the name Kinarut must have been derived because of ealry Chinese connections similar to Kinabalu and Kinabatangan.

The fort was said to have lasted until the early 20th century but unfortunately the surrounding forest caught fire and destroyed the fort. It would have been interesting to see such a fort.
history tourism

Anonymous said…
That's why I need you. I don't even know such a place exist. It would be great if the Sabah government restore this historical site.
Thursday, April 05, 2007 1:42:00 PM

thrumyeyes said…
Mr. BR, I grew up in Jalan Dakula. There used to be four barracks in that place but unfortunately they were demolished a few years ago.
Thursday, April 05, 2007 7:59:00 PM

Anonymous said…
Now Kinarut is inhabited by people which include the natives of Borneo. The Dusun word "kinorut" seem close enough to Kinarut. Kinorut mean tying a knot seriously and with the intention of leaving it permanently or the knot is not easily loosened. In the olden time natives Dusun from the countryside bring in their buffalo to this bazaar. Their buffaloes ropes at one were usually tied on to a tree using this 'kinorut' method. Buffalo is one of the precious possession of the natives Dusun and cannot afford to lose a buffalo just caused by a simple mistake of loose knot.

A village along Kota Belud-Kota Kinabalu called Kinasaraban - mean a place where something burned up. This place has a hill covered with lalang grass and almost every year on fire and occurring since hundred of years back. Kinabatangan river - 'kinobotungon' mean a part of a river that is very deep and the water as if not flowing at all, as a water in a lake. Botung mean lake. Kinabalu from word Kinopongoluan something related to a place of the dead. In the olden days a dead natives goes to 'ponguluan' mean to this mountain to the cloud up.