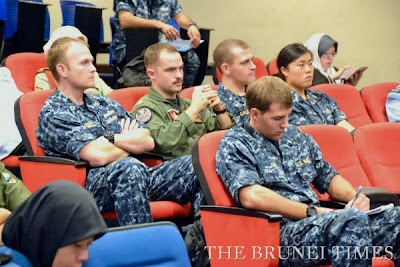 The Ministry of Defence (MinDef) in a statement said the briefing served to shed light on to the US military counterparts so they may have a better understanding on the Syariah Law recently implemented in the Sultanate this year.

“It was also to meet the interests of the US personnel who themselves were keen on learning about the penal code and thus requested for it,” a MinDef personnel said.

Hj Afif Daraina, in his briefing, mentioned that in the Syariah penal code, witnesses were almost akin to a saint-like figure. However these witnesses must be mature and were in the right state of mind. Also they must be Adil (fair) – a Muslim who performs the prescribed religious duties and abstains from committing capital sins.

From the audience, a MinDef Legal Unit officer asked: “How would you go about determining whether someone can be considered Adil?”

Hj Afif Daraina answered the penal code’s Criminal Procedure Code (CPC) can help with this but he believed the CPC is currently in the drafting stage and will be presented in due cou“But there’s a general rule on the concept of fairness, concept of justice, a person should be deemed as ideal witness as is true by whatever Islamic jurisprudence have come up with. The judge will be in the position in the concept of fairness,” he said.

This determination was made known as Tazkiyyah Al-Syuhud (Examination of Witness) – an inquiry on the witnesses can be conducted by the Court to determine whether they are Adil or not.

Meanwhile Hjh Norhatijah presented to the US personnel on the examples of punishmentOn indecent behavior in public, she said this was a broad spectrum and may involve situations where a Muslim or non-Muslim tarnished Islam’s image or brought bad influence can land one a fine of not more than $2,000 or imprisonment of not more than six months or both.

She also advised non-Muslims were best to avoid using expressions with respect to religions other than Islam except as a reference or citation.
“For example, a non-Muslim should not say Alhamdulillah I just read the Bible or InsyaAllah I’ll be reading the Bible later,” she said.

On the sidelines of the briefing, US Navy Judge Advocate General Lieutenant Kevin Loughman posed a question to Head of MinDef Legal Unit Lieutenant Colonel Norsuriati Hj Sharbini on how the Syariah penal code has impacted the proceedings in her unit.

She responded that the Syariah Law was not within the legal unit’s jurisdiction and since it was only implemented recently, it was still business as usual.

“But we will see how it goes. Maybe in future we may have talks with the AGC to see how the penal code can incorporated into the Legal Unit but of course and beforehand we must first ensure if we are capable of it,” she said.

“What we can certainly do is to continue to create more awareness on the penal code.”