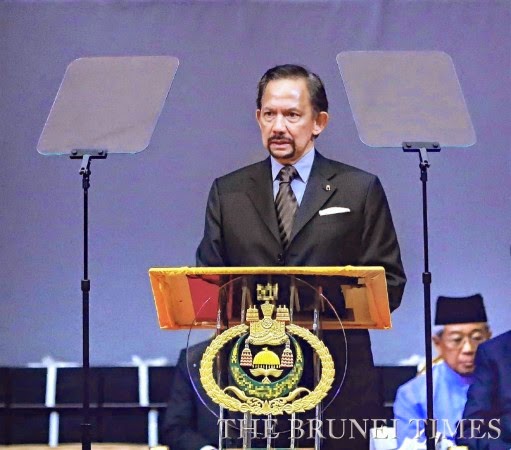 BANDAR SERI BEGAWAN, Friday, November 28, 2014 - JOBSEEKERS applying for government jobs will be able to submit and track the status of their applications online next year.

The monarch said this would help fix the delay in government’s work in recruiting and filling up vacancies.

The new service will allow jobseekers to submit their applications online, including completing the forms and making automatic data entry. They will also receive acknowledgement (of receipt of applications), and notice of interview and results of their application within a short time.

His Majesty said the theme of this year’s celebration, “A Dynamic Governance towards the wellbeing of the nation”, underscored the importance of dynamic governance for national transformation.

“Otherwise, such governance would be weak and incapable of meeting the target desired,” His Majesty added.

The monarch also urged for responsive changes in governance following Brunei’s drop in the World Bank’s ease of doing business index in accordance to the new assessment criteria.

“This shocking revelation definitely requires us to conduct self-introspection to learn about the situation of existing improvement programmes, commitment level and delivery in implementation,” said His Majesty, urging relevant parties to identify the causes behind the decline and overcome them.

While acknowledging efforts made in improving the quality of leadership and management, the monarch pointed out the need to focus on skills such as competency and ability to handle unexpected situations.

His Majesty also expressed his desire to see laws and regulations be enforced efficiently and effectively “as anything to do with discipline, for instance, is vital for a civil service that has integrity”.

The monarch was also concerned about the number of cases involving breach of trust in financial management.

“Although such cases involve negligible amounts of money, nonetheless they are among acts of offer and acceptance bribes. Such despicable behaviour and practice can easily proliferate and undermine the civil service if not dealt with in a firm and successful manner.”

His Majesty welcomed the efforts of the Management Services Department in conducting management audit that formulate the assessment of strengths and weaknesses of management in the civil service as well as awarding star status to those who met the criteria for recognition.

The monarch hoped the awards would motivate and inspire others to work towards excellence in the civil service.

At the same time, His Majesty also expressed his appreciation and prayed for the good health of the civil servants who retired from service this year.

The Ministry of Industry and Primary Resources recorded the highest number of award recipients: 16 from the Veterinary Laboratory Services Unit at the Agriculture and Agrifood Department, and another 16 from the department’s Agriculture Industry Development unit.