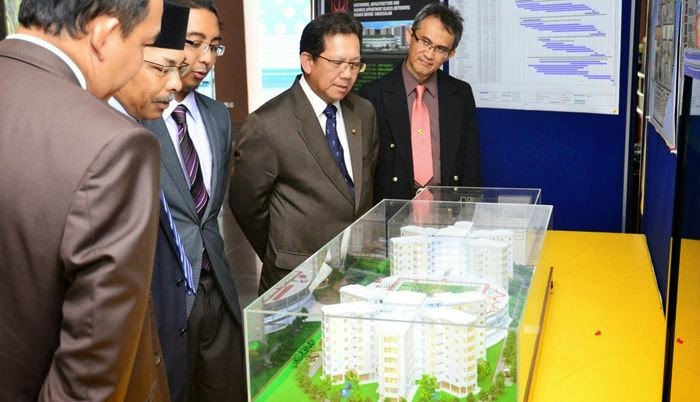 BANDAR SERI BEGAWAN, 26th November 2014 - The government's proposal to build apartment blocks under the National Housing Scheme (RPN) has received a positive reaction from the public. According to the Minister of Development, Yang Berhormat Pehin Orang Kaya Indera Pahlawan Dato Seri Setia Awg Haji Suyoi bin Haji Osman, the results of the surveys which have been carried out twice found 70 per cent agrees the construction of the housing project.

However, Yang Berhormat Pehin said the ministry has also received the input from the public towards the project's improvement and will consider it.

The Development Minister said that this matter is being carried out due to a decreasing amount of land for housing projects. It is true that from an aerial view there is still a large mass of forest but land that can be easily developed is decreasing. This is why vertical housing was proposed and it was only proposed following the supportive views of the public and suggestions for improvement.

The Minister of Development stated this in an interview after witnessing the contract signing ceremony for earthworks, infrastructure and construction of apartment blocks in the Lambak Kanan / Salambigar National Housing Scheme yesterday morning. The agreement was signed by the Acting Director of Housing Development, Awg Mohammad Nazri bin Mohammad Yusof and the Managing Director of Dara Construction Sendirian Berhad, Lim Yu Tech.

The six storey apartment will be equipped with public facilities including multi-purpose hall, concourse and multi-storey car park for the home owners. Among the main characteristic of the construction is the use of an environmentally friendly building design concept including the use of products and technologies contributing to energy conservation and use of clean water through rain water harvesting method.

The Housing Development Department plans to build more than thirty thousand houses under the RPN Scheme by 2016.

BRUNEI-MUARA, Wednesday, November 26, 2014 - AREAS for housing projects are increasingly limited as undeveloped land in Brunei is either tied to planned government projects, environmental causes or peatland that is costly to develop, the Minister of Development said.

Addressing the reasons behind the government’s move towards high-rise apartments for the national housing scheme yesterday, Yang Berhormat Pehin Orang Kaya Indera Pahlawan Dato Seri Setia Hj Suyoi Hj Osman said there was a misconception among members of the public who claimed plenty of land remained for development.

“From an aerial view there appears to be a lot of forests (and undeveloped land), but a lot of this land is peat – which is costly to develop – and what remains and is available for development has to be divided for investment, industry, farming and housing,” the minister said.

He said 57 per cent of the sultanate is already being conserved for the Heart of Borneo initiative.

Speaking to reporters at the contract signing for the country’s first high-rise located at Lambak Kanan/Salambigar, the minister said two recent studies found that more than 70 per cent of Bruneians were receptive to the idea of vertical housing which he described as “the most efficient use of land”.

He added that the future of government housing depends on public acceptance of the $55 million project – which comprises 300 units housing up to 1,800 people, replete with a multi-storey car park and a football field, among other recreational facilities on its rooftop.

“If this first high rise project is a success and is received well by the public, Insyallah it will be extended.

“If it isn’t, we will try other efforts – but this could potentially mean each house will be more costly because developing the land for the houses to be built upon will be more expensive,” the minister added.

The first phase spanning 15 hectares and containing the residential apartments will be constructed in 18 months, with completion projected by 2016.

A master plan for the vicinity of the apartments is also in the works. It may include a school and other amenities such as commercial buildings.

BRUNEI-MUARA, Wednesday, November 26, 2014 - THE Ministry of Development (MoD) and Dara Construction Sdn Bhd signed a contract for the construction of Brunei’s first high-rise apartments under the national housing scheme. The project will be completed by 2016.

The first phase of the project at Lambak Kanan/Salambigar – containing apartments which can accomodate up to 1,800 residents – will take 18 months to complete, with construction beginning at the end of this month at a cost of $55 million.

Spanning 15 hectares, the 300 units will be in 10 six-storey buildings, separated into two areas containing five buildings each – with a multi-storey car park in between which has a football field, among other sporting and recreational facilities on its rooftop.

Each apartment will be 170 square metres, with four bedrooms, three bathrooms, a living room, dining room and kitchen.

Yesterday’s contract also includes developing master plan for the vicinity of the apartments. It may include a school, community hall, commercial buildings and recreational facilities constructed across 42 hectares.

The apartments will also retain rainwater to be recycled, said an architect from the Housing Development Department.

Muhammad Zaim Arifin Rosli said the area for the project would have a definitive green concept to reduce the ‘urban heat island’ effect – where temperatures rise because of the close proximity of buildings and human activity.