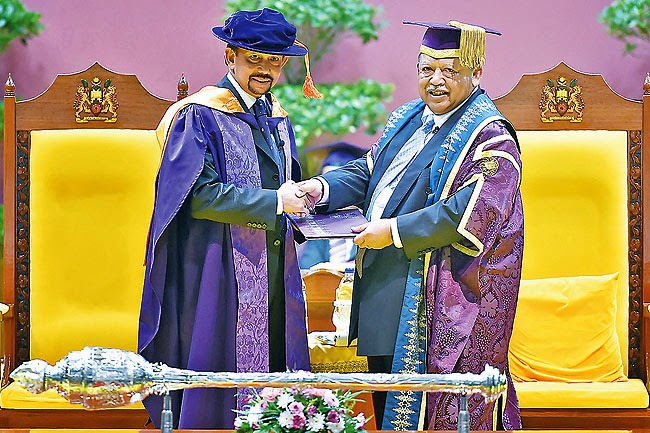 PENANG, NOVEMBER 6, 2014 - HIS Majesty the Sultan and Yang Di-Pertuan of Brunei Darussalam was yesterday morning awarded an Honorary Doctorate of Law at Universiti Sains Malaysia’s (USM) 50th convocation, which was held at the university’s Tuanku Syed Putra Hall in Pulau Pinang, Malaysia.

The honorary doctorate was presented by the Raja of Perlis, HRH Tuanku Syed Sirajuddin ibni Al-Marhum Tuanku Syed Putra Jamalullail, who is also the Chancellor of USM.

In a titah, His Majesty said he regarded the award as an honour for him and for the people of Brunei, which could serve as a catalyst towards efforts to enhance existing relations between the Sultanate and Malaysia.

His Majesty also hoped to see education cooperation among the two countries continue to be enhanced, such as having student exchange programmes.

Earlier, His Majesty thanked the Raja of Perlis and members of the USM Council for the conferment of the Honorary Doctorate of Law from USM. His Majesty views the award as a priceless memory for both the ruler and the Sultanate.

His Majesty noted that as the second oldest university in Malaysia, USM has its own long-standing history, where the university has produced graduates who have contributed to Malaysia’s development towards a prosperous and advanced nation.His Majesty was also made to understand that USM was one of the universities selected to implement the Accelerated Programme for Excellence (APEX) since 2008, further strengthening the role of the university in Malaysia’s socio-economic development agenda through its well-structured programmes.

On the special relationship between Brunei and Malaysia, His Majesty said the close ties are evident from the cooperation in various areas including education.

According to His Majesty, Brunei has received much assistance from foreign universities including USM itself when the Sultanate established its first university, Universiti Brunei Darussalam (UBD), in 1985.

His Majesty expressed his pleasure over the close relationship and hoped to see the cooperation between USM and universities in the Sultanate continue to be strengthened.

His Majesty said he wishes to see such cooperation expand from time to time through collaborations in research, as well as student exchanges between higher educational institutions of both countries.

Such collaborations will enhance the existing close relationship between the people of both countries, according to His Majesty.

His Majesty said he welcomes Malaysians who wish to continue their education in higher education institutions in Brunei.

Like Malaysia, the Sultanate too places great emphasis on the education of its people, His Majesty said, adding that this was in line with ones of the aims under the Brunei Vision 2035 – “To have well-educated and highly skilled people”.

To this end, Brunei is investing in education, and with that it aims to produce workforce that is truly knowledgeable and of high calibre, added His Majesty.

His Majesty shared that Brunei recently celebrated its 100 years of formal education.

According to His Majesty, the one century journey was not easy as it was full of challenges.

Nevertheless, with patience and resolve, Brunei managed to overcome them and now education is placed at the forefront as the catalyst to national development, said His Majesty.

Furthermore, Brunei continues to receive assistance and support from friendly nations, including Malaysia.

This is the glory of the relationship between Brunei and Malaysia established over the centuries, His Majesty added.

Today, Brunei is proud because the educational landscape in the Sultanate has vastly changed.

“Alhamdulillah, from its modest beginnings, Brunei now has four universities and a polytechnic to produce intellectuals who will together drive the country’s development,” His Majesty said.

According to His Majesty, Brunei is also actively transforming its technical education that aims to produce skilled students capable of meeting current demands. Education policies will continue to be reviewed and improved from time to time as education is not static in nature, His Majesty said.

After the conferment ceremony, His Majesty consented to attend a luncheon hosted by the Raja of Perlis at the Matahari Ballroom, Equatorial Hotel.

Upon arrival at the hotel, His Majesty was greeted by the Hotel’s General Manager, Tan Lay Hong and the hotel’s staff.

Present at the Penang International Airport to bid farewell to His Majesty were the Raja of Perlis, the Raja Perempuan of Perlis, the Yang Di-Pertua Negeri of Penang and wife, as well as other senior officials from the Malaysian Government.