The Brunei Sultan who died in China

November 10, 2008
[Note: My article below was published on Brunei Times yesterday.] 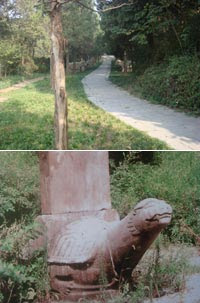 ABOUT 50 years ago, on May 12th 1958, villagers at the Village of Yinxi at Yu Hua Tai District, a few kilometres away from the city of Nanjing in China discovered a relic in a nearby forest near a hill.

It was a giant tortoise with a giant tablet on its back. This discovery however was not that unusual. The City of Nanjing was the capital of many of China's dynasties including the modern government before the capital was moved to Beijing in 1949. So it is not surprising that historical relics were discovered every now and then. The tortoise too was not unusual.

In ancient China, the tortoise was a sacred animal. Followers of the philosopher Confucius considered it one of the four spiritually endowed creatures, along with the unicorn, phoenix, and dragon. In Taoist philosophy, the tortoise symbolises the universe. Its domed shell represents the heavens, and its flat underside, the earth.

In Chinese mythology, the tortoise is one of the four celestial animals that rule the four directions. Known as the Dark Warrior, the tortoise rules the North, including the northern part of the sky.

However when experts first read the texts carved on the tablet, they were shocked to discover that the tablet was describing the tomb of a king from a foreign country, who died while visiting China in 1408.

More relics were soon discovered in the area. These were the statutes that are usually placed on both sides of the path leading to a tomb. There were four warrior statues, two tigers, two cows, two horses and two column plinths, some broken but generally all well preserved. Finally the tomb itself was discovered at the base of a hill. When Chinese historians completely deciphered the tablet, it tells of a fascinating tale.

It was the story of a visit by a King called Ma Je Ka Na from the Kingdom of Poli. It seemed that in August of the sixth year of the Reign of Yongjie of the Ming Dynasty (1408), that King visited China with a delegation of 150 people including his wife, brothers, sons and entourage.

Unfortunately, the King fell ill in Nanjing, where the Emperor ordered his imperial doctors to treat and take good care of him. It was said that the King was very grateful and told his wife that his people should never forget China's kindness. The King was buried on Shizi Hill outside the Andemen with the burial rites normally offered to kings. According to history, Poli was one of the ancient names of Brunei. As far back as the 14th century, the King and his envoys had been visiting China. That visit in 1408 comes after a series of other visits.

According to Chinese records, in 1370, Shen Chi, a magistrate and Zhang Jingshi, an Imperial Supervisor from Fujian Province went to Brunei.

Friendly exchanges between the two nations have a long history dating back over 2,000 years ago. As early as China's Western Han Dynasty, the two countries have already exchanged trade in goods.

Since the discovery, the mausoleum has been constantly repaired and well maintained. According to the Chinese records, in 1958 and 1959, all the stone figures were uprighted and all the broken stone carvings repaired. The first path was laid and the surroundings of the tomb area improved.

By 1975, the tomb area was afforested and beautified as well as repairs to all the stone figures including replacement of missing parts. By 2004, a tablet pavilion, an arched gate, the tomb and an altar were rebuilt. The Hall of Friendship between China and Brunei were completed as well.

The China-Brunei Friendship Hall completed in 2006, was inaugurated by Yang Teramat Mulia Pengiran Anak Puteri Hajah Masna very recently. Now, the mausoleum and the hall have become famous tourist attractions in Nanjing and are seen as testimony of China-Brunei traditional friendship.

Who was that King of Brunei who died in Nanjing? According to the Brunei History Centre, even though the King was not mentioned in the Brunei Salasilah, that King called Ma Je Ka Na and described as Maharaja Karna by the Chinese was in fact Sultan Abdul Majid Hassan. He reigned in Brunei from 1402 to 1408. In the genealogical table produced by the Brunei History Centre, Sultan Abdul Majid Hassan was placed in between the first Sultan of Brunei, Sultan Muhammad and the second Sultan of Brunei, Sultan Ahmad.

According to the Chinese historical records, Sultan Abdul Majid Hassan left a son called Xiawang (Si-Awang?) who was on record visiting China in 1412 together with his mother and wife.