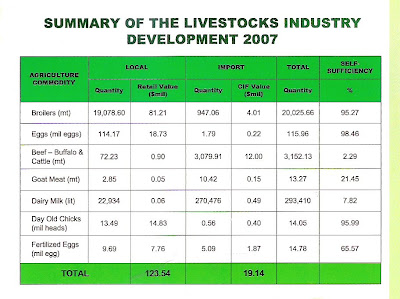 About a couple of months ago, I was at MIPR for discussion on our paddy productions. Paddy or padi in Malay is now an important topic since His Majesty's decision that we should not be dependent on other countries for our rice supplies. Why am I involved? Production of paddy requires two things - huge tracts of lands and enormous and copious amount of water. Without these two items, you cannot hope to grow rice.

Anyway, during the meeting, the Agriculture Director gave us a little handbook containing all the agricultural statistics that you ever wanted to know about agriculture. For instance do you know that we produced about 229,648 stalks of cut flowers in 2007? Did you know that only comprised 18.54% of Brunei needs and we needed to import another 1,009,192 stalks of flowers over the same period. Where did all those flowers go? We also grew 4,372 tons of fruits over the same period which is not enough to meet our needs. But that unfortunately means that we imported an additional 18,694 tons. Anyway, you get statistics like that.

For today, I wanted to highlight the statistics of our livestocks industry. We are pretty much okay in chickens only relying on a small scale from ouside both for our chickens as well as our chicken industry. But we are totally dependent on beef from outside as well as goat. Can we make us be self sufficient in beef? I doubt very much as you require a really large tract of land for cattle farming. The one that we used to own in Australia was a few times Brunei size. I guess we have to resign ourselves to being importers of beef and goat meat.

Someone raised that same argument about rice as the tract of land required is also large. Yes and no. With rice you can increase production by increasing the number of harvesting. So with the right paddy, and the right conditions, you don't need as much as land as cattles. The amount of land needed is certainly large but with commercial farming, it can be worked out. Though growing rice requires water. And that even in Brunei's heavy rain weather needs to be maintained properly. Dams and barrages needed to be built where the rivers are and heavy water infrastructure needed to be built. Can we get full sufficiency? Based on the current projections, we certainly can in a few years time.

Pg Runa said…
topographically Brunei is hilly towards the interior so is it not possible to make use of these terrain for commercial paddy farming by the govt? We should set up a KEMENTERIAN PADI for this national issue. Local companies lack the capital to invest! I wonder what would happen if the Thais dacide not to sell rice to us anymore. Do we eat ubi kayu like our grandfathers did during WW2?
Wednesday, November 19, 2008 9:10:00 AM