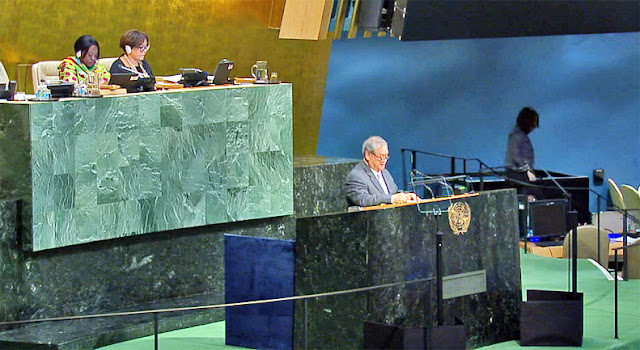 ‘Terrorism shouldn’t be linked to any race, religion, nationality or ethnicity’
September 24, 2017

BRUNEI Darussalam welcomes all efforts of the international community to prevent and eradicate terrorism and violent extremism in all their forms and manifestations.

Minister at the Prime Minister’s Office and Minister of Foreign Affairs and Trade II Pehin Orang Kaya Pekerma Dewa Dato Seri Setia Lim Jock Seng said this during the General Debate of the 72nd Session of the United Nations General Assembly in New York on Friday.

“Like many others, we are concerned with the constant threats of terrorism and violent extremism,” he said.

“Sadly, in various parts of the world, the casualties resulting from terrorist attacks continue to shock us all. We condemn such horrendous acts and convey our deepest sympathy as well as condolences to the families of the victims.”

However, in order to address these threats, he said that it is important to examine the root causes of terrorism comprehensively, such as poverty, marginalisation and alienation, notably among the youth.

“It is our hope that focussing on education, youth development, creating job opportunities, advocating the responsible use of social media, and promoting dialogue among different faiths and civilisations will greatly help in our effort to bring about positive change,” he said.

“Equally important is to instil in our people’s hearts and minds the values of peace, harmony, moderation and mutual respect.

“It is through these values that we may be able to create societies that are resilient to destructive ideologies.

“Working closely with youth, religious leaders and local communities, will be essential to help realise this.”

“In our pursuit to leave no one behind, we should not forget the plight of those suffering from war, conflict and occupation,” he said.

“Like everyone, the Palestinians also have hopes and dreams to be educators, doctors, engineers, artists, athletes and innovators, which are all for the good of humanity.

However, for half a century, foreign occupation has tremendously hindered many of them from achieving their full human potential to contribute more towards global development.

“As the legitimate and truly representative organisation on the planet, the UN has a moral and legal obligation to enforce these rights and ensure accountability for actions that contravene international law.

“We continue to count on the UN as well as all relevant parties concerned to find a comprehensive and lasting peace and stability in the region.

“We have to press on with all efforts in translating the growing international recognition of the State of Palestine into positive changes on the ground, so that the Palestinians can pursue sustainable development in their own homeland.”

“This is the basic foundation for the Association of Southeast Asian Nations’ (Asean) success as it celebrates its 50th anniversary this year. So, for the continued progress of Southeast Asia and the region at large, it is the responsibility of all concerned to ensure a stable, safe and secure environment, one that is free from conflict, war or threat of war,” he said.

“We also strive for stronger engagement through confidence building, preventive diplomacy and conflict resolution through peaceful means. It is through these efforts and close cooperation among ourselves and with our external partners that Asean hopes to further contribute towards global peace and development.

“Asean’s achievements over the past 50 years in ensuring regional peace and security have enabled Brunei Darussalam to pursue its development objectives in a peaceful and harmonious environment. We are pleased that our country has consistently achieved very high-ranking in UNDP’s Human Development Index.”

“Therefore, creating job opportunities, especially for our young people, will be crucial in raising their standard of living,” he said.

“In Brunei Darussalam, we are continuing our efforts to diversify our economy and advocate free trade bilaterally and regionally with an aim to achieve a dynamic and sustainable economy.

“While pursuing economic progress, we should be mindful of the correlation between human activities and climate change.

“This is where the Paris Agreement can galvanise our collective action to give a cleaner, healthier, safe and sustainable planet for our future generations.

“Brunei Darussalam will continue to do what it can to contribute positively towards this.

“At the same time, conserving our forests is a high priority and this complements well with our multilateral efforts, including the ‘Heart of Borneo’ initiative and recently, the ‘Queen’s Commonwealth Canopy’. All in all, it is about educating our people to care for and protect our planet. Strengthening global efforts in this area is indeed important.”

“It is important for the UN to enhance its working relationship with its network of partners, including regional organisations such as the OIC, Commonwealth and Asean.

“To better reflect the needs and realities of the 21st Century, the world needs a stronger, more effective and efficient UN.

“As such, we support our Secretary-General’s ideas to reform the UN and re-position our organisation to focus more on conflict prevention measures, including mediation.

“We believe such endeavour will greatly help the UN optimise its work and resources, and above all, save lives, safeguard people’s dignity, and promote peace and security around the world.

“We want a UN that is fit for its purposes and principles as enshrined in the UN Charter.

“Ultimately, it is the responsibility of all member states to ensure that the United Nations truly live up to its name.