Tale of an Envelope 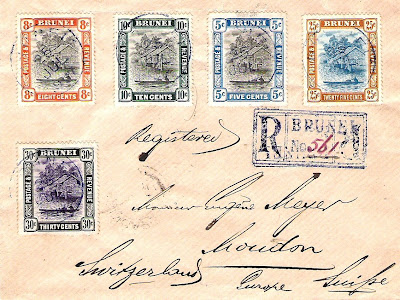 These stamps on this cover were the first truly official Brunei stamps. In 1895, Brunei had the first private but officially sanctioned stamps. In 1906 when the British Resident first appeared in Brunei, there was a postal service but the stamps were Labuan stamps overprinted Brunei. So these stamps were the first officially used stamps in Brunei to be used by the Postal Authorities. In fact these designs stayed on until 1951, 47 years later.

The stamps on this envelope and this envelope tells an interesting story. This letter was addressed to someone in Moudon, Switzerland. We don't who it is in Brunei who wanted to send a letter to Switzerland way back in 1907. 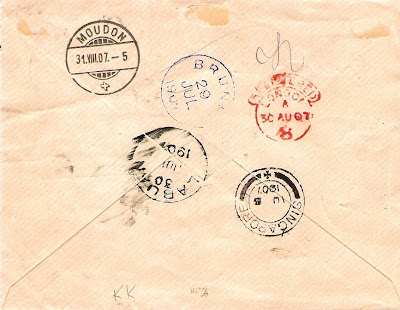 The stamps in front of the envelope was postmarked 25th July 1907 and this was the 516th letter to be registered in Brunei. But the postmarks at the back tell an interesting story.

The letter did not leave Brunei until 29 July 2009. It arrived in Labuan on 30 July 1907. Labuan, the year before was absorbed as part of the Straits Settlement Government and therefore served as a postal clearing house for the regions nearby. From Labuan it ended in Singapore on 5 August 1907, a journey of about 5 days by ship. Singapore as the centre of the Straits Settlement Government processed the letter and forwarded it to London.

It arrrived in London on 30 August 1907, a journey of 25 days from Singapore. Europe must have an established postal network but extremely slowly network as the next postmark was Moudon itself on 31 August 1907. The recepient must have received it in the next few days which would be in September 1907 which is about 6 weeks after it left the sender in Brunei on 25 July 1907. Not bad for the postal service in 1907. Letters from USA took about 3 to 4 weeks nowadays!

This envelope was on offer for $850 before I bargained. I managed to get it for a lower price but packaged together with the stamps which I blogged the last few days.