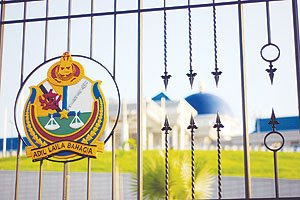 On Friday, my village Ketua Kampong came to where I was sitting at the mosque and asked me about some personal matters. We also talked in general about conditions of the residents in the village. He mentioned that some of the residents were not poor but 'susah' (in difficulty) and that is why they needed help.

That's an echoing theme throughout last Saturday's first session of written questions posed by the members on one side (the non-government) of the Legislative Council to members of the other side (the government). The questions were all about finance - allowances, pensions, TAP savings etc.

Everyone wants the status quo - the return of the pension scheme, allowances to be continued even after one has retired and even for those with pension to receive the full pension earlier than the current system which is after 15 years of pension. The position of the government is that it is unsustainable in the long run. If I am not mistaken the government is already paying around $300 million a year just for pensions and old age allowances. I do agree that the current TAP contribution rates is in no way sufficient to pay for one's retirement.

There were other national issues being raised such as public transportation, job security, economic issues, the condition of Brunei's eroding coastal line and the famous Temburong bridge. As a lay person I personally would not be very happy with the answers though as a government man, I understand why the answers were the ones given. My friend who sat next to me kept muttering and commenting about the somewhat technically correct answers but... To me, the most important thing obviously is that the public can raise these important questions in a public chamber through the appointed representatives.

Today, we look forward to the budget speech that will be given by the Second Finance Minister and after that the Council will go into committee. In committee, the members can raise any question related to the budget and the questions will be related to the budget in question. For instance, while discussing budget for the police, members can raise any issue about the police. This time the questions are not written therefore the minister concerned does not have advanced warning what questions which will be asked by members on the other side.

The committee session for the next few days, is very interesting and I urge those who has the time to go to the Leg Co to see for yourself the debates. If you want to hear your questions, you better know who your District representatives are or know any of the non-government representatives, email them or sms them what you need them to ask. Otherwise dress smartly and ask for a pass from the Legislative Council counter and see the debate for yourself.

justin said…
Mr BR - I read the answer from the Finance Minister in the Sunday Bulletin re. in the possible reintroduction of the pension scheme vs TAP with interest. The article stated that, "One of the main objectives of the government in introducing the TAP in 1992 is to balance the appeal of private sector and the public sector, and to encourage locals to participate in the local private sector."

I would be interested in what you thought about this statement - presumably gleaned from the Minister himself, although we shall have to await the official Hansard transcripts to note whether the reporting is accurate. Because to me, that suggestion makes little sense. Essentially what the Minister implies is that TAP serves as a levelling factor between the appeal of working in the government sector vs the appeal of working in the private sector. In other words, because the financial rewards of the local private sector are currently so unappealing at the moment, we need to make working in the government equally unappealing. I'm no economist but it seems to me a lose-lose scenario! Instead of levelling the playing field by making the government sector LESS rewarding, how about encouraging schemes that make the private sector MORE rewarding on parity with the recompense offered by the government. It's ludicrous to suggest that making the government equally unattractive as the private sector is a good way to boost the market and rejuvenate the economy. It's like the US government suggesting that there's a disparity between Harvard and Massachusetts Community College - so lets make the standard of Harvard equal to Massachusetts Community College for better equality and parity instead of trying to raise the standard of aforementioned community college.

I come from a medical background. I am currently a doctor in training in the UK, and it seems to me that if the intention of TAP is to make the private (and overseas sector) look appealing then, especially for doctors, they have certainly succeeded. Many of those in government service at the moment, are looking at private sector employment and not a few Bruneian doctors have either moved to Singapore where renumeration is better, or the UK. So I guess, it's well done to TAP. But seriously - this is meant to be a good thing for the country? That some of the most qualified, educated and expensively trained young professionals are leaving the government service and some are leaving the country altogether in what is likely to be a trickling brain drain is I would imagine an unintended outcome of TAP, as opposed to the Finance Minister's statement that this is an intended outcome.

There is no question that for a developing nation, the strength of it's civil service is vital, and that strength is dependent upon the ability to attract and retain bright, intelligent, highly educated workforce. I'm not sure how by providing lose-lose options such as the financial renumeration offered by TAP, which as you yourself have pointed out is woefully insufficient to sustain long-term needs, our government will be able to do that.

Can the government sustain the pension scheme as was currently offered prior to the early 90s? Probably not. But can we get something better than the TAP we have at the moment? If the government wants to see Brunei, a credible, thriving country, than I don't think they have a choice. They need to offer something better. The people need to come up with something better. There needs to be a public discussion - not just at the top, but also a grassroots movement, a forum involving ministers, international experts, local businessmen, economists, but most of all involving your ordinary Joe average - the office worker, the civil servant, the teacher, the doctor - the people who will actually be affected by the outcome of the discussion.
Monday, March 16, 2009 4:54:00 PM