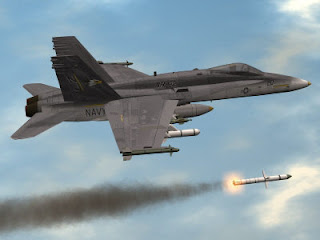 Last Sunday, at about 5 in the late afternoon, I heard a very loud sound. I was not able to come out and see for myself but I knew that sound. It was a jet engine and a very loud one and very close overhead. On Monday, our MOD DAF who lived in Tanjung Nangka told me he saw jets. It was not until yesterday that I finally learnt that 2 United States jet fighters made an emergency landing in Brunei last Sunday due to a technical glitch.

Brunei Times reported that a U.S. embassy official in Brunei confirmed that the two F-18 Hornet Navy jet fighters had to make an unscheduled stop en-route from Japan to Thailand. One of the planes developed a slight technical glitch in Brunei air space and had to make an emergency landing at the closest alternate Brunei International Airport. The two planes were carted away to the Air Force base in Rimba, Gadong after they landed with Brunei's permission. The planes were being repaired at the Rimba Air Base by U.S. technicians and were expected to fly out of Brunei soon.

The jet engine sounds triggered a portion of my memory. In the 1970s, I was a small boy staying in Bangar, Temburong. My dad was the DO then. A neighbouring country used to send its jet fighters zooming across Temburong buzzing at low level whenever the soldiers of another neighbouring country came for training. In those days, unlike today, the soldiers came via small ships. I used to be excited at the buzzs. I could be wrong but I don't think those jets had our permission to cross our airspace. So I remembered that jet engine sound. Though Sunday's engine sounds were much louder. 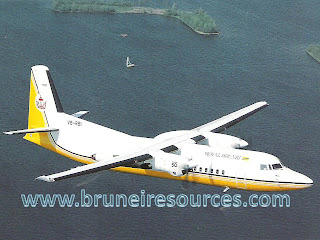 Speaking of jet engines and aeroplanes, I managed to purchase this postcard for my postcards collection recently.

This was one of RBA's older aeroplanes, an F50 Fokker. It must have been in the early days of RBA as I don't remember this plane very much or at all but I was told that this plane used to fly to KK and probably to Kuching as well. I was just wondering whether this is a plane we should return to consider for RBA's shorter flight routes. Its payload is quite small but then the propellers ought not to be too complicated to operate. It probably cost very much less to maintain than our Boeing or Airbuses being used at the moment especially when the air traffic market has dried up in today's recession affected aviation world. Anyway, I am not an expert, so it is just a thought.

Bulgemeister said…
That Fokker50 was not as long as you thought it would be. If I am not mistaken, it was used by RBA in the early 90's (or perhaps mid 90's). It was used to fly from BWN to Miri, Labuan and Kuching. There was a bigger Fokker100, which was even used to go to KL.

Now that we are not getting the B777, as reported a while back, any news on the Dreamliner (B787)? It was reported that RBA might lease this aircraft when it is launched soon.

I also remember back in the late 1980's, there was this huge military exercise involving many countries and one of them used their jet fighters. There was one in afternoon, when we had our Ugama classes, when one of the fighter jets might have flown really low and a loud noise was heard which stopped everyone in their tracks.
Thursday, March 05, 2009 9:14:00 AM

Unknown said…
Yes if memory serves the Fokkers were extensively used for short haul flights in the early 90's but there had been complaints about the turbulent-unfriendly shaky ride and of the noisy turboprop.
Thursday, March 05, 2009 1:35:00 PM

55 said…
Bulgemeister, I have the feeling the Dreamliner wont be coming as promised as the leasing agency were badly affected financially by the constant delays from boeing.
Friday, March 06, 2009 3:54:00 PM