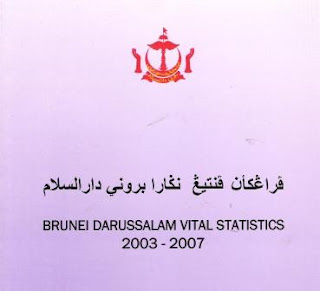 I was back at work yesterday after a 3 week leave. I think I took too a long a leave and it took a while for the brain to move to its normal speed. The last time I took anything longer than a week was to go to Scotland for my second Masters degree convocation and that was back in 2002.

The Vital Statistics provides time series data for 6 years of the live births, deaths, marriages and divorces in Brunei. If you are involved in planning and needed these statistics, this book is indeed vital (my pun!) for you to get.

I read through it and I was struck by the interesting data provided in the marriages and divorces statistics. Did you know that in 2007, out of 457 divorces, 119 involved wives who are aged between 25-29 and 98 involved wives who are aged 30-34. Similar ages for husbands. And out of that 457 divorces, the highest number occurs when the marriages are 5 years old. I know there is a 7 year itch but I did not realise in Brunei it is the 5 year itch.

Anyway, if you are interested in all these statistics, the book is available at JPKE at Ong Sum Ping. I don't know how much it is. The last one (2002 edition) before this one cost $7, so it would probably be around that price range too.