The Seizure of Labuan 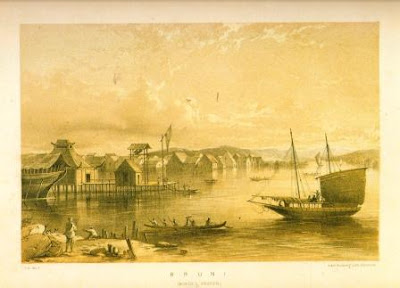 This lithographic print of Brunei is probably one of the most reproduced old scene of Brunei. This print came from a book written by Frank S Maryatt entitled Borneo and the Indian Archipelago and printed in 1848. I managed to get a reprint edition of that book in Kino during my last trip to Singapore. I think there were a couple of copies left and it is sold for $159.43.

Frank Maryatt was a British Midshipman (more or less equal to a 2nd Lt or something similar in the navy) and served on HMS Samarang from 1843 to 1846. The ship supposedly was on a surveying mission and went round the Borneo and East Asia going round to Singapore, Nagasaki, Korea, Sarawak, the Spice Island, Hong Kong and Manila. It did go to Brunei though unfortunately not to survey.

HMS Samarang was the ship that played the gunboat diplomacy and threatened to blow up Brunei if Labuan was not given up to the British. There were obviously incidents related to the demand but I personally think the demand was a dastardly act and that the seizure is illegal even up to today. Anyway, that's subject for another entry in the future.
history

Bricks & Blogs said…
There is a book available for limited preview at Google Books entitled 'History of Brunei' (by Graham Saunders) which has similar pictures. Out of the 20 available pictures, I managed to view 8. Plate 3 appears to be the same picture.
Thursday, May 08, 2008 5:47:00 AM