Brunei versus Spain - The Castillian War 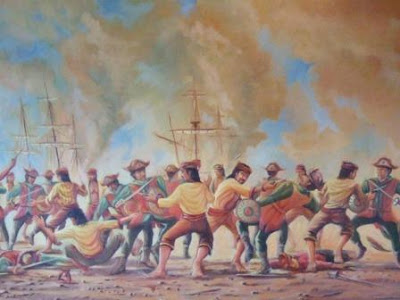 BRUNEI attained its golden age under the reign of its fifth ruler, Sultan Bolkiah, known as Nakhoda Ragam. During his reign, the Brunei Empire spread not just over the whole island of Borneo but as far as Sulu and Saludang (Luzon) in present-day Philippines. He not only increased Brunei's trade but was also able to help spread Islam.

Brunei's Golden Age continued even after the death of Sultan Bolkiah in 1524. Sultan Abdul Kahar was also able to increased Brunei's territories which included the whole of Borneo, Palawan, Sulu, Balayan, Mindoro, Bonbon, Balabak, Balambangan, Bangi, Mantanai and Luzon. With the Brunei traders, Islam spread far including to the southern Philippines islands and Brunei was recognised as a centre of Islamic propagation.

This was so widely acknowledged that the Governor of Manila, a Spaniard by the name of Francisco de Sande, wrote to the son of Sultan Abdul Kahar, Sultan Saiful Rijal, imploring him not to send any more Muslim preachers to the Philippines islands. In 1578, one Joan Ochoa Ttabudo wrote in his report that Islam had spread to Balayan, Manila, Mindoro and Bonbon.

In the 16th century, Spain and Portugal expanded their territories in Asia. Malacca fell to the Portuguese in 1511 and by 1526, the Portuguese had succeeded in securing a treaty of friendship and trade with Sultan Abdul Kahar. Brunei exported a number of items to Malacca. Brunei seaways also became part of the shipping route for Portugese vessels.

The Spaniards came to the Philippines in 1565 and captured Manila by 1571. Manila was used by the Spaniards also as a trade centre but also to spread Christianity. However with the strong influence of Sultan Abdul Kahar and later Sultan Abdul Rijal, Islam remained strong in the southern Philippines.

Brunei was seen as a big threat to Christianity. The destruction of Brunei became the Spaniards' primary objective in the mid-16th century.

In 1573, a Spanish delegation was sent to Brunei to seek an audience with Sultan Saiful Rijal. The Spaniards offered Brunei a treaty with the intention that Brunei be placed under Spanish protection. The Spaniards also wanted the Sultan to receive Christian missionaries so that they could spread Christianity in Brunei! Sultan Saiful Rijal did not accept the treaty and angrily rejected the suggestions.

Five years later the Spaniards returned. This time they took advantage of a brewing civil war in Brunei. Two of Brunei's lords who had quarreled with the Sultan, went to the Spanish government in Manila and promised to help the Spaniards when they arrived.

The Spaniards' Armada with 40 warships was headed by the flagship Santiago. The Armada left in March 1578 and by April of the same year had arrived off Brunei. The Spaniards sent a letter to the Sultan demanding — among other things — a carte blanche for "preachers of the holy Gospel, who may preach the law of the Christians in your lands in all security", that Brunei "send no preachers of the sect of Mohama to any part of these islands" and that Brunei must "forbid its people from asking tribute in these islands".

Sultan Saiful Rijal tore the Spaniards' letter and rejected the demands outright. De Sande, on learning that the Sultan would not agree to his demands, immediately attacked the 50 Brunei warships surrounding him. The Bruneians were caught by surprise and, outgunned by the Spaniards, were not able to defend Brunei.

The Sultan went to Baram River with most of his people while the Spaniards were in possession of the city. Sultan Abdul Kahar died in Baram in August the same year.

Before leaving, however, the Spaniards destroyed one of Brunei's finest buildings, the Jame' mosque, which de Sande ordered his men to burn down out of anger and spite for losing the battle to stay on in Brunei.

The great mosque was described by Alonso Beltran, a Spanish traveler, as five-storeyed on the water but that may be a slightly wrong description as the technology to build five storeyed buildings in the 15th century on water was not yet available in Brunei. Most likely, it had five roofs to represent the five pillars of Islam. It must have been very big and impressive and it blazed throughout the night; by morning there was nothing left.

Some historians took the middle road. Perhaps there was no big battle, they said, but there certainly was guerilla fighting and the possibility that the water had been poisoned by the oppressed Bruneians. Perhaps there was indeed divine intervention. Whatever it is, the Castillian War had entered into Brunei's consciousness. The war indeed is still remembered today as a heroic episode of Brunei's past.

Francisco de Sande had hoped to deal a blow at the propagation of Islam by invading Brunei. His defeat proved otherwise.

In 1586, the Manila Council condemned the 1578 attack as unjust and unprovoked. All galleys and artillery pieces looted by the Spaniards were ordered to be returned and it was decreed compensation should be paid.

I'm a student currently based in the UK. All this time being here makes me to realize how deep and affectionate is my love to my country. How I'd spent my time growing up in Brunei taking it as granted. How ungrateful I was and
how little do I know of my own country especially its rich and diverse history, which built as a foundation for what Brunei is now.

Keep up the great work Tuan Rozan. I'm sure there is a lot of Bruneians out there who are just as curious to find more about their place of birth/raising up and I'm sure how proud they will be to be called Bruneians once they have done their research.

I praise Allah for this work of yours and I pray for the achievements of whatever your objectives are. ^_^

FlyBoy said…
Brilliant flashback to Brunei's past. The Battle of Kastella was what i was taught back on primary school.

Congratulations for venturing into historical writing especially about Brunei history which is unfortunately very rare and what are available can hardly be construed as absolute facts of the matter.

My curiosity grew when as a student of Islamic history in this part of the world, I find many inconsistencies, incongruities and lack of credible references, like, as you admitted, you are only writing from your own point of view. To state just one instance, you claimed that Brunei was solely responsible for the spread of Islam in what is now -Philippines. However, other authors of international repute are saying; Sulu was 'Islamized' by missionaries from the "Ahlul Bait" arriving via Sumatra, Malacca and China. Of course, Islam was brought to Manila and other islands from Brunei, but none to Mindanao.

Anonymous said…
There is a book that describe this event in much detailed. When the Spaniards ransacked the houses (the store rooms) they found lots of poisonous roots were kept in jars together with the lots of weapons (bows, swivel-gun, portable cannons).
There were also accounts from the spanish the soldier were sick because of the water been poisoned.

And with some of the weapons in the hand Bendahara Sakam's men, surely a fight back by Sakam's men would scared them off and made them return back to Manila.
Friday, February 21, 2014 8:16:00 AM