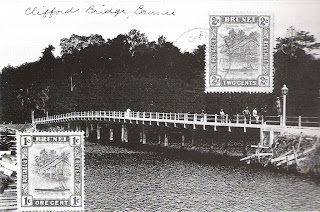 One faithful reader of this blog is one who used to be my Chairman and is indeeed a respected member of the Cabinet, told me the other day is that my entry on a Brunei road scene is not one of Brunei roads. Honestly speaking I have no idea either except that the photo does come from a book about Brunei's postal history. He promised to ask someone to confim it.

For today, another old photograph. This one should be recognisable. No?

This is what was then known as Jambatan Rangas. Ring a bell? This photograph is taken around 1920/30s and this bridge crossed the river joining the town newly built along the banks of Brunei river to the Mile One area. In the 1950s, the Edinburgh Bridge was built next to it. And sometime in the 1980s a second Edinburgh bridge was built. It was over time this older Clifford bridge became known as Jembatan Rangas. If you drive into town and on the Edinburgh bridge, you can still see the remnants of this old bridge to your left. The bridge is still usable, I would have thought someone would have repaired or restored it and turned it into a historical attraction or something.