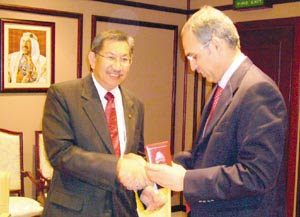 (From MENAFN - Bahrain Tribune) The Ministry of Finance (MOF) yesterday (14th January 2008) inked two agreements with the Sultanate of Brunei Darussalam the reciprocal promotion and protection of investments and the avoidance of double taxation and the prevention of fiscal evasion with respect to taxes on income and on capital.

The first agreement reflects the willingness of the two countries to create favourable conditions for greater economic co-operation, particularly regarding investments of investors of each country in the territory of the other. It also marks their belief that the encouragement and reciprocal protection of investments through international agreement is conducive to the stimulation of business initiatives and increasing prosperity in both sides.

The second agreement ensures that residents of both countries will not be subject to double taxation with regard to income and capital taxes levied by either country.

This week Bahrain and Brunei signed two agreements - (i) On the Reciprocal Protection and Promotion of Investments; and (ii) Avoidance of Double Taxation. What does these two agreements mean and what benefits do they bring?

The first agreement is where both countries agree that in order for investments by nationals of both countries either Bruneians in Bahrain or Bahrainis in Brunei, their investments will be protected by the two governments. In other words they will be allowed within the law to invest in either countries and to return their profits to their own countries. Their investments will not be seized by the governments and even if they are, they will be able to have compensations. At the same time in the agreement will also be ways on how to resolve any dispute which normally involves the International Centre for the Settlement of Investment Disputes in Washington.

The second agreement is where both countries agree that there should not be any double taxation. If a Bahraini company was to operate in Brunei and make in profit and pay taxes in Brunei, that company does not have to pay the tax for the same profit back in Bahrain and vice versa. There are other things in the agreement but that's the main crux of it.

These two agreements are basic infrastructure investment and taxation requirements for most countries around the world and international companies look for these. Most good corporate international companies are willing tax payers and investors but they generally want to make sure that their investments are protected and they do not have to pay double taxes on their profits. So the more agreements like these, the more companies are willing to consider countries which their own country have signed agreements with, for their investments. For us here in Brunei, these agreements are needed so that those companies find it comforting to invest in Brunei and at the same time, it also opens up opportunities for our own companies to consider expanding into those countries.