January 03, 2007
I was at Muara at my brother-in-law's yesterday where we had our Hari Raya Haji gathering. As usual when siblings and in-laws get together, the talk turned towards history - what happened to who and how did this come about etc. My brother-in-law took out several photos - really really old photos - being the self-appointed keeper of all these stuffs and it was guessing time as to who was that 2 year old kid in the ancient photos. 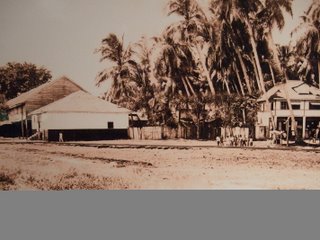 One of the photographs (attached photo) interest me a lot. It was a photo of the old Muara town. I am not sure what year it was, but I am guessing around 1930s and at the latest 1940s. If you look at the photo, you would see an old shophouse on the right hand side of the photo where there is a group of kids playing in front of it. On the left hand side is a warehouse of sorts - I was told that this is where the rubber collection point is. Rubber will be brought in from the various rubber plantation around the area and would be kept here.

The interesting bit is the railroad going through the town. Just a few hundred feet to the right of that shophouse would be the Muara beach. So the railroad would be passing through straight to the beach (the beach here is no longer accessible as Muara Port was built on it). This railroad is only about a couple of miles long at most. It would start from the Brooketon Colliery at Serai Pimping and end at the beach. Serai Pimping is the area where the roundabout at the end of the Muara-Tutong highway is at the moment. The Brooketon Colliery is actuallly situated at Simpang 172 off the highway, you can see the simpang when you go round the roundabout and go to the end of the simpang. You have to walk through a lot of bushes to get there presently - but it is a protected area. Anyway, the railroad would start here and go straight through Muara to the beach for the coal to be exported out of Brunei. 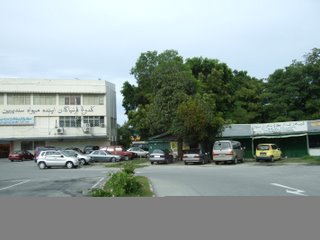 On the way home, I took a photo of the current Muara Town. The first photo is where that old shophouse used to be where the shophouse unfortunately is no longer there replaced by some wooden houses. And where there used to be empty land is where the bigger buildings housing some of Brunei's supermarkets and department stores. Of course the railroad is gone, replaced by a road.

Unlike most other countries, where there are railroads, in Brunei, railroads system were never fully developed which I thought was a pity. To develop one now would be quite costly. There are only two railroad tracks in Brunei - one of them was this one in Muara and the other was somewhere near Lumut.

Anonymous said…
Isn't the other train track somewhere in Labi? I love history and I enjoy looking at old pictures, thank you for sharing.
Wednesday, January 03, 2007 2:14:00 PM

Anonymous said…
The other train actually ran from Badas to Seria (if I'm not mistaken) to carry oil workers to and fro these two places. It was ran by the predecessor of Brunei Shell Petroleum (BSP). An actual carriage can be seen at the Parit Recreation Park, along the road from Sengkurong to Limau Manis.
Wednesday, January 03, 2007 7:25:00 PM