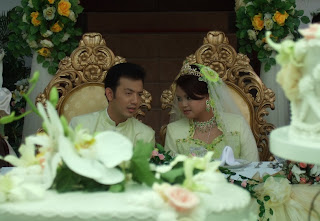 Yesterday, I only managed a cursory glance at the Bulletin and because of that, a string of articles which I thought was ironic caught my eye. Somehow I found them related to each other and in some sense can make one fairly caught in a bind as to which one we should follow.

The first was an article by our infamous Ignatius entitled thought yesterday's Weekend Bulletin Smart Girls Finish Last. Stephens talked about how Brunei women now well educated and well positioned are finding it increasingly hard to find a life partner. This is based on observations that many women now holding middle ranking positions, well educated and capable yet incapable in finding husbands. According to Stephens, there are many of these instances in Brunei. The article blamed men. A quote from a businesswoman - "Brunei men like submissive women. They easily get intimidated. They demand dominance. But this day and age that is getting not so easy." This phenomena is not limited to Brunei but is a worldwide issue. Though Stephens ended the article by pointing out that marriage may not be necessary. A number of doctors and psychiatrists hold the opinion that their unmarried women patients tended to be happier than many married ones.

The second was an article written by Suparman talking about how to find a partner (from the male angle) entitled For Love or Money. He started the article by asking "are you satisfied with your girlfriends?". An interesting start indeed. He asked whether to choose men have chosen carefully or always on the lookout for even better partners - beauty, wealth and love. He talked about the difficulty of finding partners. Where do you meet your loved ones?

The third was an article written by Saraziz entitled When the Magic Fizzles Out. This is about a man who after 20 years of marriage seemingly having it all - wife, kids and career. But But marriage, for him, is a big disappointment with the thrill going out of marriage. Everything has become a routine. His world rotating around a single set of rules: "get up, get ready for work, send the children to school, busy myself in the office, pick my children up, send them to ugama school, get home from work, pick the children up from ugama school, perform my prayers, have dinner and go to bed." To get the "sparks" the man eventually had affairs with others.

Finding partners have always been difficult. Last July when I posted two articles entitled Looking for a Partner in Brunei? (Part 2) and Looking for a Partner in Brunei? there were many comments and to date, those 55 comments for the two articles remained the biggest for any postings. In today's world, education and career have taken a more prominent role. Time passes by so quickly that by the time, one realises it, you are not as young as you used to be. So what happens when the biological clock is ticking against you? Is it time to get desperate or as Stephens and Suraziz says it - maybe it is not such a bad thing after all. I don't know. I have always been for procreation especially when Brunei does not seem to have enough people. But then what do I know.
weddings

Zul-Fadly said…
This is not a new issue. I rather not touch whether it is a good or bad thing, but I believe that there is always someone for someone.

Never lose hope when it comes to kinship. 'Telajak' or 'Expired' (forgive me if this is a rude word)still entitles one to live happily ever after.

The notion of intimidation must be put forward to the female gender. Do they intimidate the males by norm or by choice? It is not their fault that they are successful. They worked hard to get where they are. It seems they only fail at finding the one.

Our neighbouring country late last year was in disarray as an unauthorised law of marraige was practiced. The Marraige by contract was when the woman would marry a man only for a certain period of time and she would be responsible for his food, shelter and pocket money.

Again we should be humbled that no such thing has happened here. Some of our women have resorted to marrying another nationality for the fact that no Bruneian wanted to marry because of status. Not a bad thing, if its love you can't stop it.

Anonymous said…
If alum ada jodoh, camna jua... just last week, i had a meeting with my long-time-no-see friend, and of course the topic we discussed everytime we met was about guys... this friend of mine is a university graduate, and she said, she needs to find a guy who is also a degree holder like her... many reasons to that as she told me one by one... well i don't blame her, some people memilih due to some reasons... will a degree holder woman want to marry a peon? hmmm... jodoh itu di tangan Tuhan
Monday, January 15, 2007 5:40:00 PM

Jewelle said…
I think the title is a bit misleading. I do not agree that only smart or educated women who find it hard to find partners. To me, its just a case of being not being fated to find someone yet. I know women who are both educated and not highly educated and are still single. Maybe its because most women nowadays are more independent (financially, emotionally and socially) that they find it hard to find men who are on equal level of mentality? As to unmarried women being happier, that is rubbish just as much as saying that married women are happier. There are happy unmarried women and vice versa and same goes to married women. It's all in our fate and situation. Being married or unmarried does not determine your happiness.
Monday, January 15, 2007 10:56:00 PM

Anonymous said…
I would like to extend to you all this interesting short article that I came across the other day, entitled Feminisim and the control of Womanhood by Nancy Levant. She claims that the feminist movement, ironically developed by men, is a social-engineering tactic used by the world elites. To "liberate" women and give'em more "rights" so much so, so that they can be equal to men. But in reality they just want them to work just as hard as men to turn the gears of their materialistic machinery to fill up the elite's own pockets even more.
Interesting read.
Tuesday, January 16, 2007 3:34:00 PM

Anonymous said…
Ignatius's article about smart women finishing last is rubbish. It's all about individual choice.

You can choose to marry or not. And most people, both women and men, choose not to marry nowadays until their mid to late 30's. Statistics will show you that.
Tuesday, January 16, 2007 7:35:00 PM

Anonymous said…
his article is somewhat true but only from his point of view, old and still...man.
why can't women choose? by that i mean by choosing the right one-compatible.nowadays women are much more careful about their choice of husbands. smart women think long term.
marriage is not "play-play"...you invest not only you heart but also you body, mind and soul, not to mention your paycheck.
we should go into marriage hinking "this is it". however, there's the mindset that goes "oh, well. if it does not work out, we can always divorce"forgetting that in Islam, it is not an act to be encourage.
to avoid divorce, the preventive measure is to choose wisely not "bongkakly".
i've reached the age where questions of marriage have become a common topic during gatherings(how normal). it seems that right after graduating, it's the next step in life. have ppl forgotten the earning-a-living part.
AND the money that goes into the wedding?? its ridiculous! I'm not stingy but come on, it's only for what, a week? and that does not even constitute a marriage. why waste all the money in a wedding? invite ppl that don't even give a fig about you? that don't even stay long enough to even see the sanding? not to be mean but i usually think they come just to gather fodder for their gossip session.
better save the moeny to use for the marriage, invest, get a car, buy a land, house or something. some couples don't even stay long enough to pay of their wedding debt(for those who take out a loan) before divorcing. *shudder*
i dream of a white nikah ceremony not a glamorous wedding if possible. sadly it may remain just that, a dream.
but trying my best to defy the "tradition". i wanna find a guy who holds the same views as i do. mind you, it's not a ticket to a cheap wedding, rather this: save on the wedding and invest more into our marriage life, for our future children.
i'm not only looking for a husband, I'm looking for the father of my future children.
yes, jodoh di tangan tuhan but remember, we humans differ from all the other beings bcoz we are given a brain-a mind and a will to choose.
so smart ladies, do not crumble. biar lambat, asal selamat. they are men who deserve YOU. bnyk kan doa and also ikhtiar. Insyaallah akan dimakbulkan.
in the mean time, continue with life, enjoy being single.
good luck and god bless.
Thursday, January 18, 2007 10:49:00 AM