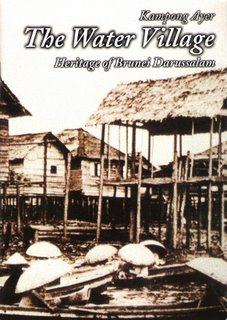 I was going through a number of books in my collection searching for old Brunei photographs over the last few days. I have been scanning a number of them and to date I have about a 100 or more of them. I have made a small selection available in my previous postings. The oldest of them is as usual - that of Kampung Ayer. I did not realise that one of the earliest photographs of Brunei was that of an 1880 photograph of Kampung Ayer. Of course compared to the likes of photographs produced by David Cheok and AnakBrunei, the ones that I have are not as clear or as artistically done. I will try to upload these and make them available to everyone.

While doing that, one of the interesting books I found was this booklet which I had quite forgotten. The booklet entitled "Kampong Ayer The Water Village Heritage of Brunei Darussalam" was produced by the Home Affairs Ministry in 2000. It actually came in an album sized box comprising of this booklet, a big map of Kampung Ayer and a VCD. I found the booklet and the big map, I had no idea what happened to the VCD. If I am not mistaken the VCD was a recording of visits by the APEC Leaders' spouses and other dignitaries to the Kampung Ayer. I don't quite remember the cost, it cost either $20 or $50.

The booklet itself is interesting as it is probably one of a few or if not the only one written so far about the Kampung Ayer. It highlighted many interesting aspects of Kampung Ayer such as the existence of Batu Masap (Rock of Retribution) or Batu Kedayan, Jong Batu, Pulau Cermin and Lumut Lunting. Each of these has its own myth and legend as to how they were formed. For instance Batu Masap was said to be a sulap (a hut) turned into a rock because a group of Kedayans burst into fits of laughter while eating ambuyat and some ambuyat was flung out whereupon a thunderstorm caused the sulap they were in to be toppled and turned into a rock. The rock can be found at the tributary of Sungai Bunga. A photograph of the rock is available in the book.

However, the book is not as comprehensive as one would like. It covers only superficially the more interesting aspect of Kampung Ayer and focused more on the modern aspects of Kampung Ayer. The products of Kampung Ayer are highlighted - the silverware, the brassware, the wood carving, the woven cloth (kain tenunan), anyaman and the kuih kering - Brunei's traditional biscuits. The economic activities are also highlighted - the Padian and fishing activities; as well as the culture of Kampung Ayer such as the various traditional dances of Brunei and musical instruments. All in all, the booklet does try to cover much of Kampung Ayer but given the limited size of the book and probably the aim of it is much more geared towards the tourists market, it is not as comprehensive as a Bruneian would like. It would be more interesting if someone was to follow up and write a more comprehensive book about Kampung Ayer.

I am not sure if this book is still available but do ask the Ministry of Home Affairs. Hopefully if they get enough queries, they might consider publishing a more updated one.