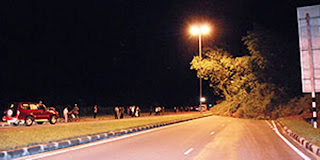 Yesterday was another long drive to get to the office. The landslide at Tasek Meradun is not that far from where I live and we found that the road in front of the house is deserted as the police has closed the road heading towards Tasek Meradun from both ends. The driver decided that rather than be caught at the Jalan Gadong jam, we should to go through Sengkurong, Jerudong and the highway and also knowing that the Rimba and the Old Airport junctions will be jammed decided to press on to the Berakas Link Road. Surprisingly reaching the office took less than half an hour. In the evening was another long jam at Gadong and the landslide debris still has not been cleared. I sure hope by the time I post this entry this morning, the road would be passable.

The hills on the left hand side of Jalan Tutong heading towards Bandar at the area are prone to landslide. The authorities have done much to contain the hillside all these years judging by the amount of work they have done over the last 10 years but after such unusual heavy rains, it is almost next to impossible to stop the inevitable hill slide. The interesting question would be - knowing the steepness of the hill - was it a shoddy road widening job and should anyone be blamed? The only thing I know is that the widening of the road was not originally done by the authorities - if you remember the saga during the mid to later 1990s, then you would know who. Of course having said that, the authorities are now responsible for maintaining it.

The other day I happened to meet one of the top brass of the PWD in one meeting I chaired. Basically his answer is that with the current rains which supposedly occur once every hundred year, it is almost impossible to cater for such eventuality. Theoretically we could. We could build the canals to such sizes and the hills reinforcements to such thickness that they can cater to everything but then they would be horrendously expensive. The best we can do is to cater for the usual disasters and then hope the one in a hundred year don't come during your lifetime. We have been pretty lucky that there has been no death casualties because of all these natural disasters. If something the size of Katrina in New Orleans were to happen here.... The choices facing the authorities sometime are not something that we want to face. Ours is a small country, imagine a bigger country with many more demands - despite what we have in this country, even then we are not satisfied with what the government have provided.

Once a disaster strike, the management and the containment of it is an issue. We have multiple agencies - all this while surprisingly the various authorities have coped. The authorities have realised that there is a need to coordinate the various efforts and now we have a new agency in town called the Natural Disaster Management Centre (NDMC). I was part of the working group that prepared the groundwork at my previous agency a couple of years ago. Towards the third quarter last year, the high level committee chaired by no less than the Crown Prince met and now the NDMC is officially formed. The NDMC located at the Old Airport and currently made up mostly of Fire and Rescue Services officials will now be responsible for the coordination of any rescue and other works necessary caused by natural disasters. Being a new agency, there obviously were teething problems and it was only lately that the NDMC took a much larger profile. Given that natural disasters have an uncanny ability to strike when we least expect it, hopefully the centre will be able to manage and coordinate the various efforts.
Photo credit: Borneo Bulletin
current affairs disasters

Anonymous said…
In any National Disaster Management Centre (NDMC)organisational structure, professionally-trained PARAMEDICS are an indispensable lot. And sad to say in RIPAS General Hospital or even in the whole of Brunei Darussalam for that matter, there are only a handful of experienced paramedics. A few good men are insufficient if disaster strikes..
Wednesday, January 17, 2007 8:04:00 AM

jack said…
Really? And i thought the NDMC was just an agency set up to represent us to all those international disaster meetings. Tsk! Tsk! Little do i know. I guess i've been reading the paper too much. i wonder when they are going to start PREPARING us for a major disaster..tsunami? major forest fire? flooding? How about telling us what to do should we face a natural disaster in our back yard.
Wednesday, January 17, 2007 10:14:00 PM