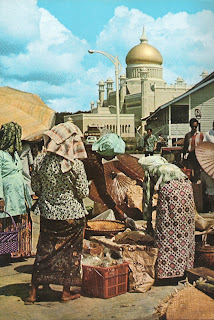 Out of the blue, I received the following email from a Mike in London who wrote that:-

"Although I have yet to visit Brunei, and I have friends there, thanks for posting the old photos of Brunei - it's a strange world, but I have recently being doing some research into old British streetlights - I told you it was strange - and there on those 1950s/60s photos are some old UK style concrete lamp columns! I suppose in many ways it's not a surprise (Singapore used similar ones), I'm now researching to see if they were imported or made locally!

If you want a fascinating snapshot of 'old' Brunei I recently bought a secondhand copy of the 1960 State of Brunei Annual Report, published by, no-less, the Colonial Office. In the true tradition of bureaucracy it even lists the total numbers of geese and ducks in the country, even if it admits it is a bit hazy as to the number of human deaths because of the complexity of having them reported to the correct authorities! If you get the chance you should look the series up!"

I wrote back and told him that I will be looking up the 1960 series if I can find it. I also asked him to share his findings about the street lightings. He replied:-

"Goodness! Well, you never know it might take your enjoyable site up one of the great backwaters of history - I mean, I wonder whoever stuck those concrete 'monstrosities' (there was a great debate here in the UK in the mid-50s led by the Royal Fine Arts Commission about the design of such things) up in Bandar in 1950 - whatever would they have thought that 50 years on it would have even been recalled! Yes, I'll certainly let you know what I discover (if anything!) By the way there were 570 street lamps in Brunei in 1960, 285 in Brunei Town, 168 in Kuala Belait, 93 in Seria, 19 in Tutong and 5 in Bangar - the joys of historical research!

Anyhow, thanks for adding to cyberspace - and it just goes to show that web-pages and postings can have the most unlooked for consequences!"

Well.... That's the thing I like most about doing the Daily BR. I get to know that little bit more about Brunei from other people who have the knowledge.PS. The photo was taken in 1968 showing the old Tamu at Jalan Sultan Lama with the street lamp and Masjid SOAS in the background.
history

Anonymous said…
Thanks for the pix which brings back memories of old, or rather, my younger days. slight correction ie there was no jalan sultan lama, only kampong .. pix show tamu at junction of jln pretty and jln pemancha, and barek polis bujang!