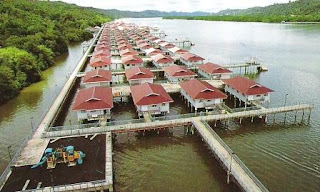 There are three modern Kampung Ayer resettlement villages - Kampung Sungai Bunga, Kampung Bolkiah A and Kampung Bolkiah B. These three resettlement villages are the ideal (by today's standards at least) of what the houses should look like. No doubt, aesthetically there is much to be desired as the houses each looking like the other becomes rather characterless and aesthetically challenged but at least these houses are safe - unlikely to catch fire and fire is unlikely to spread to other houses as there is now a standard distance between the houses.

Of the three, Kampung Sungai Bunga at Pulau Berambang is the more visible one. If you drive along Jalan Kota Batu, you will find a huge carpark filled with cars but not a single house around the area. If you look closely, all the houses are on the other side of the river bank and the only way to get to those houses is by boat which will probably take around 10 minutes. There are 112 houses, each a four-bedroom house with a police post, clinic, shop, playground, water tower and several small bridges. The houses were completed in May 1997.

The origin of the name of the Kampung Sungai Bunga is very interesting. The Kampung obviously is named after the river Sungai Bunga (Flower River). It was said that at certain times the river would emanate the smell of the jasmine flower. The smell was sharpest especially at night. However if one was to search for the sources of the smell, one can never find it. Locals believe that the sweet flower smell came from ‘Orang Kebenaran’ or ‘Orang Bunian’ or suffice to say, the little invisible folks who lived in the river. (Could be the kin to the same folks who ran off with my golf club.)

Pulau Berambang also has a historical site. It has the mausoleum of Sultan Muhammad Hassan, the ninth Sultanof Brunei. He died in 1598.
kampung ayer origin

Anonymous said…
Another interesting fact about these 3 kampongs is their sewer system operated using a vacuum system instead of gravity type. I used to work at these 3 kampong sites during their construction. There is another similar kampong further down Jln Kota Batu across the river. My memory failed me on the name.
Friday, February 02, 2007 8:36:00 PM