The Brunei Coal Mine 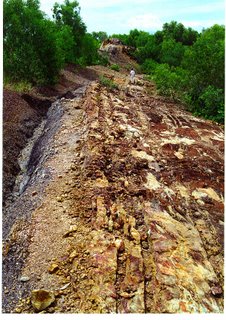 On Borneo Bulletin, about a month back, there was a mention about turning the old Brooketon Colliery in Muara into a heritage park. The Museums Department wanted to turn the historical 62 hectares coal mine as an open site museum to promote the country's eco tourism. It is currently already a protected site under the Antiquities and Treasure Trove Act. A number of readers must have been wondering when did we have this coal mine and how come we don't have it any more?

In Brunei, we just do not realise sometimes how lucky we are and how rich our country is. Currently we have the oil. But in terms of natural resources, we still have the silica sand unexplored, the peat which can be converted into energy, the coal and the trees. That's why in the old days, Bruneians were great traders trading our goods far and wide. Unfortunately we seemed to have lost that skill with most of us now preferring to be civil servants, sitting down in airconditioned room and pushing papers.

So what about the coalmine? Coal was first reported in Brunei Darussalam near Muara as early as 1837. The mine was called the Brooketon Colliery when coal was first discovered. At first it was mined under European supervision in 1883. But in 1888, the mine was leased to Charles Brooke and between 1889 to 1924, it was operated by the Sarawak government. Annual exports of coal varied between 10,000 to 25,000 tons annually and in those 33 years of operation, more than 650,000 tons were exported. At first it was opencast until it became harder and underground mining was introduced. It closed down in 1924 because of heavy financial losses caused by continuously decreasing coal prices in the world economic recession.

Brooketon Colliery was strategic as it was very near to Muara where then and now there is a safe deep-water anchorage to which the mine was connected via rail. So there was a rail line that connected Brooketon which is about one and a half mile away from Muara.

According to Brunei Shell, there are a number of other coal bearing seams throughout Brunei. A nearer one is at the Kianggeh and Mentiri Valleys and at Berambang Island. Another area in Tutong is at the Tutong and Keduan River Valleys and in Belait is the Ingei and Topi Rivers. Lumut Hills and Labu Sycnline also have it as well.

We forget that coal played an important role in the world economy before oil. Steamships rely on coal for their fuel. In fact when coal was discovered in Labuan in 1844, the British decided to annex the island from Brunei. When the Japanese invaded Brunei, it was not just the oil that attracted them but the coal deposits that we had in the country too.

I have asked a few people but most are unsure where the exact location of the mine is. I supposed we have to wait until the Museums Department is ready to open the open site Colliery Brooketon Museum.

Anonymous said…
I went to the Coal mine in Muara about thirty years ago when I was at the correspondence school on tapak kuda (I still have some iron rail spikes which I collected there from the ancient tracks) There were old steam engines and buildings there.

The mine is very near to where the muara road meets the coast road today - to the left hand side of the hill on the seaward side of the junction.

BORNEO.MINING said…
i thought this is a link to coal importer from brunei..
but it's ok,not mistakes if i'm offering all readers coal from other side of Borneo,right ?? just ask me for more of my company coal production to : aat_borland@yahoo.co.id

Anonymous said…
Whwhy not renovate the coal mine into a discovery park as a historical site ?