Sunday and the rest of the week 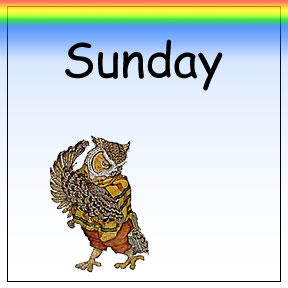 Did you know that 'Sunday' was originally a Latin word and that for everyday from Monday to Friday, you are actually honouring the Romans' and the Germanic's gods?

It was speculated that the dividing of the week into 7 days goes back to the Babylonian time, even way before the Romans. Most probably this is due to the 7 planets known at that time. But it was the Romans that first adopted the seven-day week giving their Latin names to the days - solis dies (sun's day); lunae dies (moon's day), Martis dies (Mar's day), Mercurii dies (Mercury's day), Jovis dies (Jupiter's or Jove's day), Veneris dies (Venus' days) and Saturni dies (Saturn's day). Thus, in Latin, the names of the planets are also the names of their gods and so these days were dedicated to those gods (except for Sunday and Monday).

In modern French, the Latin influences remain, the weekdays became Lundi (Monday), mardi (Tuesday), maercredi (Wednesday), jeudi (Thursday) and vendredi (Friday). The weekend names were baptised to be more 'chistian' thus Samedi for Saturday, supposedly related to Sabbath and Dimanche for Sunday (this is derived from a Latin phrase which means Lord's day).

How did these names became the more familiar English names that we see today?

The older English language was influenced by the the Germanic language which were in turn influenced by the Romans but instead of borrowing the Latin names, the days were translated into direct German or equivalent German gods except for Sunday and Monday. Thus 'solis dies' became 'sunnandaeg' - Sunday; 'lunae dies' became 'monandaeg' - Monday; and the rest of the days they substituted their own gods having similar qualities - thus 'Martis dies' became 'Tiwesdaeg' - Tuesday (Mars = Tyr spelled Tiw in old English); 'Mercurii dies' became 'Wodenesdaeg' - Wednesday (Mercury = Odin = Woden in Old English); 'Jovies dies' became 'Thursdaeg' - Thursday (Jupiter = Thor); 'Veneris dies' became 'Frigedaeg' - Friday (Venus = Frigg, wife of Odin). But the Germans did not have a god to equate Saturn, so Saturday was 'Saeterndaeg'.

We don't realise how much homage we pay to the Roman's or the Germanic's gods everytime we say the names of the days!

Anonymous said…
gosh, the next thing you know, someone's gonna ban these english named days in Brunei, and renamed them to hari 1,2,3,4,5,6 dan 7.

Anonymous said…
Or Surah Jum'ah for tha matter. In Syria, they work and take break on Thursday & Friday and work from Saturday to Wednesday.
Tuesday, June 06, 2006 12:22:00 PM