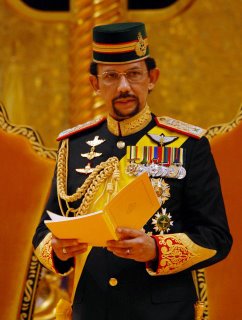 His Majesty's 60th Birthday Celebrations started off with the usual parade at the Padang in the Capital. But his titah caught many people by surprise when he announced the accelerated increments for the current civil service, so come Monday when the circular officially comes out, everybody will know just how much they are getting, so I can't say anything until then. I will try to put up the official circular when it is officially released so that readers can read it.

There are so many things to talk about but I have a special request to talk about the banquet feast that was laid out inside the main banquet hall. So together with about 300+ guests inside the main banquet hall, we were served in the lavish surrounding of the palace. Since this is the anniversary of my appointment, I had the benefit of experience and came well prepared. First of all, I have to admit that the quality of the food is first class and are designed by artisans who specialised in food designs. Even the cutlery and the place settings are all first class. 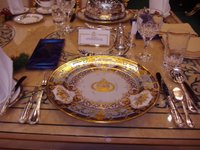 However if you are used to the more Asian type of food with rice and everything, I am sorry to say that you will not be getting those. But for the 5000+ guests in the outside banquet halls, the food served is the traditional Asian style with the dome serving. I can assure you that you will not have any problem with hunger pains there. However in the more lavish surroundings, it is a slightly different story. You feast with your eyes and less with your tummy. So you have to savour everything you eat. 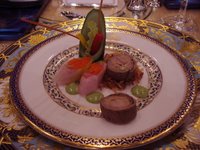 The menu started off with Veal Roulade, Chicken Liver with Fresh Tuna, Ginger Pickels and Cilantro Sauce. The starter wasn't too bad but you have a little bit of trouble picking out the tuna - it was sort of sprinkled on the chicken liver and not that much. I am not much of a food connosieur, so I wasn't sure what cilantro sauce is. I know it's the green bits on the plate. 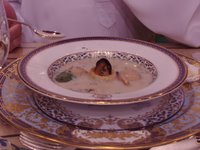 Soup was Cream of Vegetables Soup with Smoked Mussels. The soup was nice but mine didn't came with any mussels, so I had to take the photo of my neighbour's dish which had more of everything. The smoked mussels is the brown bit in the middle of the soup plate. The bits floating are the mussels - these are the ones missing from my plate. 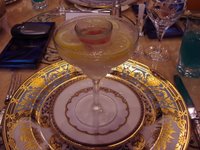 I am not sure why sorbet is always served during fancy dinners. Apparently I was told by a more experienced diplomat that sorbets are to whet one's appetite before having the main course. So our sorbet despite the fance name of Chilled Promegranate and Passion Fruit Aspic - Intermezzo is only the small cup in the middle of the big cup. The rest are just ice and lemon slices and are not supposed to be eaten. 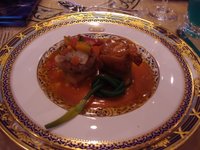 The main course was Artic Surf Clam on Glazed Pineapple with Seaweed Prawn Roll. The surf clam is the pink bit sitting on glazed pineapple slice. There was something else in it but I wasn't sure what. The Seaweed Prawn roll was more distinguishable. It had the prawn tail sticking out. Despite the portion, the dish was nice especially the gravy. 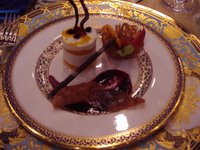 The dessert was Soursop Parfait on Vanilla and Blueberry Sabayon. The petit fours are made up of Atlantic Mist and Fruit Punch. Of course there was the usual bread rolls throughout the course and chocolates at the end.

BRUNEI resources said…
to lavendrness: the drink is called Atlantic Mist. It's made of cordial and lemonade and has bits of lemon and strawberries inside it.

to beksta: yes, maurina is right. tho in the inside banquet hall, the menu comes in a fancier format - this year's come in a tablet form with a removable sliding top. last year's was like a scroll with its own scroll casing. i'll try to take a picture of it and post it if i have the time.
Sunday, July 16, 2006 1:31:00 AM

rose said…
*LoL*
the comments on the missing mussels and the tiny sorbet glass managed to crack me up! hihi.

Anonymous said…
Very amusing... So I jus wondering since your menu was mostly seafood based did u have to fill in a request before hand or did everyone have the same thing? Because honestly if I got invited to sit in the same hall as u Mr. BR Sir I wouldnt eat anything as I am not a seafood person but the Sorbet did make my morning hehehe... Very interesting... I love the food presentation... Wonder who the chef is...

Anonymous said…
Told ya people would be interested to know ;-)

Anonymous said…
sorbet is usually served before the main course as it is meant to clear your taste buds of the flavours of the starter and soup courses in order that you may enjoy the delectable main course properly. supposedly kills the flavour of the previous courses.
Wednesday, July 19, 2006 12:28:00 PM