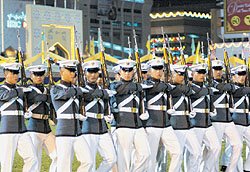 I was among the 10,000 crowd watching the first performance of the Brunei Darussalam International Tattoo 2006. Last night was an all invitation only and it was a record attendance. For the record, it is worthwhile watching though 3 1/2 hours was a tad too long and very discomforting. My wife and I were seated about 2 rows behind the royals, so we had to sit and bear the 4 hours that we sat in those seats.

I actually found our own forces' performance to be more entertaining that everyone else's. The most conservative (read boring) was the British. Even the Jordanians and the Pakistanis were entertaining. By 11 plus, my eyes refused to open and my wife had to nudge me several times to keep me awake. After watching umpteenth drum majors twirl their whatever it is you call it, it gets kinda repetitive after a while. Watching the heart shapes being performed again and again was another downer. I just realised heart shapes must be the easiest shape for military bands to do. I was hoping for more precision drills but only the Filipinos did it.

I remembered a couple of months back, someone asked me to write about the tattoo and how it originated. I actually did a little bit of research on it - basically visiting the Edinburgh Military Tattoo website and other related websites and found several interesting things. It was easy connecting Edinburgh to tattoos. When I was in Edinburgh four years ago, the biggest thing there was the Edinburgh Castle and the major tattoo performance that they have there.

So where and how does tattoo originate? It appears that the term Military Tattoo dated from the seventeenth and eighteenth century when the British Army were fighting in the Belgium and Holland. Drummers from the British garrison were sent out into the nearby towns at about half past nine each evening to tell the soldiers that it was time to return to barracks. The drummers would shout "Doe den tap toe" which is to encourage all the inn keepers to "turn off the taps" - stop serving beer - and send the soldiers home for the night. The drummers continued to play until the curfew at ten in the evening.

What most people don't know is what does 'doe den tap toe' means. For those interested the word 'tap toe' - it comes from the Dutch taptoe or tap-shut (closing time for taverns). So the word tattoo means tap, spigot, tap (from Middle Dutch tappe) + toe, shut (from Middle Dutch) - hence shut the taps. The word has evolved today so that 'tattoo' is now taken to mean (1) A signal sounded on a drum or bugle to summon soldiers or sailors to their quarters at night (2) A display of military exercises offered as evening entertainment (3) A continuous, even drumming or rapping.

How did the evolution come? This came from the evolving process of the tattoo. By the late 19th century, the calling out to innkeepers became more of a show. Bands and displays were included and shows were often conducted by floodlight or searchlight. Tattoos were commonplace in the late 1800’s with most military and garrison towns putting on some kind of show or entertainment during the summer months. Between the First World War and the Second World War elaborate tattoos were held in many towns in England.

According to the program book that came with last night's performance, this tattoo is the fifth that has been performed in Brunei Darussalam. The first was held in August 1965 in Seria performed by the Royal Brunei Malay Regiment (RBMR)and the QE Gurkha Rifles. The second was held in May 1970 to celebrate RBMR's 9th anniversary - why celebrate 9th with a tattoo and not 10th - I don't know. The third was held in October 1977 at Tutong wehere this was to in celebration of Her Majesty Queen Elizabeth's Silver Jubilee. And the fourth one was held in October 1992 for His Majesty's Silver Jubilee Acccession to the Throne.

So if you have purchase the tickets, go and enjoy and at least now you know what to say to the guy sitting next to you and show off your new found knowledge of tattoos.. By the way, come really early as the parking will be full by the time you get there late.

Anonymous said…
we were stuck outside the gate for quite awhile. reason was the organiser had to make sure that there was no congestion up in the stadium. but having to stand and wait for nearly 30 to 40 minutes? And this was the entrance for B2 & B3 people.

once we entered, only to find out, the seats for us were already full.

Anonymous said…
i share your sentiments of discomfort being in a 3 and half hours tatoo show. The two shows that caught my attention was Indonesia and China, the rest was such a bore. The local band however lack originality, it was like watching a scene from the movie Drumline, the even played the same song.

I left with a sore back from sitting too long and blisters on my feet from walking from parking area to the stadium. I hope paying patrons for the next few shows will have a much better time than i did.
Sunday, July 30, 2006 11:54:00 AM

Anonymous said…
The seats were crammed. I sat next to a plus size male who had to seat bangkang2 because there was not enough leg room for him. Everyone wanted to sit near the aisles & didn't get up to give space for org lalu untuk duduk tangah2 sampai my kasut tertanggal. Plus a lot of people's backsides brushed me!
Sunday, July 30, 2006 1:41:00 PM

Padian said…
I went and watched the show as well... Unlike others that have left comments, I had an enjoyable time, with both my eyes open during and after the show. I came early, parked comfortably, avoided traffic and queues... Overally, exciting! Other than the dirty seats one have to endure...

Brunei displayed a good show. Other countries that 'others' enjoyed were Indonesia, Philippines and China. I personally liked the choir as well... They were amazing. With more practice, they can be BRILLIANT!

The students were clearly enjoying themselves. I enjoyed myself, too, despite the peculiar smells breezing past my nose from all directions.

Have you been to Edinburgh to watch the Military Tatto they display (anually) in the castle grounds during their summer festival? I have... several times as a student. It was more brilliant... and definately hands UP compared to the one i had witness... BUT not a bad show altogether.

Anonymous said…
I was hoping for more weapons drills, I think those are more exciting. All we got were bands playing, maybe it does take alot of effort to play and move at the same time and yeah what is up with all the hearts? The Australians were pretty good too. It would have been better if there were close ups being displayed on the big screen then we could see the costumes and such... Anyhoo,yeah the beginning was good, the baton twirllers were fun to watch, siok sendiri type thing and the end where all the bands came onto the field. Good part, free ponchos cos it rained last night.
Monday, July 31, 2006 8:39:00 AM

Anonymous said…
I'd have to agree with Padian. My friends and I went to catch last night's show and we found it to be really enjoyable.

The Bruneian and Indonesian bands did a really good job. What was the Pakistani dude singing? All I could hear was "Pakistan" over and over. It was hilariously entertaining though.

The seats sure were dirty. Couldn't the volunteers have atleast sprayed the seats with water hours before the show?
Tuesday, August 01, 2006 1:05:00 PM

I found your resource page on Edinburgh. Is there any chance you could include a link to our Edinburgh Tattoo Packages?

They are now available to book for the 2017 Tattoo.

The page is at https://www.theatrebreaks.com/edinburgh/shows-edinburgh/royal-edinburgh-military-tattoo-breaks