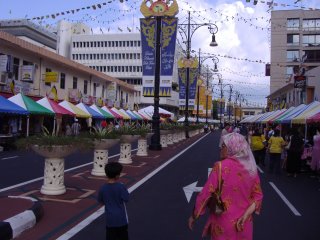 Continuing on my series of 'there are lots of things to do on a weekend in Brunei' - last Sunday afternoon, my family and I took a walk down the 'new' Jalan Sultan in Bandar Seri Begawan. For those of you who have been 'frogs under the coconut shell' (katak bawah tempurong) and have been out of touch with what's happening in Bandar Seri Begawan - the municipal authorities have finally renovated Jalan Sultan with new sidewalks, new lampposts and a complete new look.

What's more they are now organising weekend bazaars along the road 'ala' Jalan Tengku Abdul Rahman in KL. The crowd was okay for a Sunday afternoon even though there was not that much new things being sold under the 88 colourful canopies. We asked one of the stallholders and they said that they only get charged something like $23 for the 24 hour session they have to be there from 6 pm Saturday to 6 pm Sunday. Apparently the stalls are to be opened 24 hours. Kudos to the local authorities for attempting to boost our nation's capital to be more lively and more vibrant. Interestingly Cafe de Royale also took two canopies right in front of the cafe and all they had there were very colourful sofas. An interesting extension to their walkway cafe. 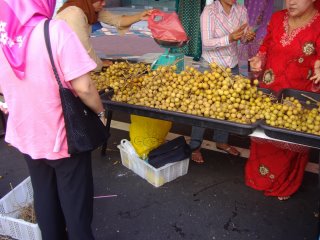 Two products always stand out during July and especially in the celebrations of His Majesty's birthday in July are longans and 'sotong tutuk'. I have always wondered why longans always turn up at all fruit stalls during this time of the year. It never fails. Come HM's birthday, come longans. Apparently it is coincidental. The fruits are normally picked in China and Thailand as two of the major producers during mid Summer which is around this time of the year. The prices in the stalls are still high at around $4.50 a kilo. Come next week, it will be as low as 3 kilos for $10.00. Here's something you did not know about Longan. One is that the flesh of the fruit is administered as a stomachic (stimulating digestion), febrifuge (allying fever) and vermifuge (to expel intestinal worms), and is regarded as an antidote for poison. A decoction of the dried flesh is taken as a tonic and treatment for insomnia and neurasthenic neurosis (weakness due to anxiety and depression). In Vietnam, the "eye" of the longan seed is pressed against a snakebite in the belief that it will absorb the venom. 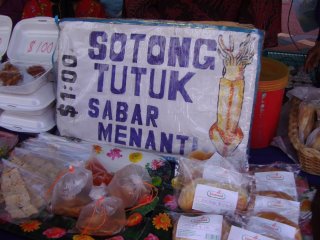 The other product is our famous 'sotong tutuk' literally hammered squid. My first knowledge of sotong tutuk was many years ago in Pantai Muara. Whenever you go to the beach, you always get sotong tutuk. An old man drying an already dried sotong and hammering it to make it softer and chewy and you eat that with some sambal sauce. Oooh. It's heavenly. The smell of the dried sotong being burned wafting through the crowd. I am not sure which is the best sotong tutuk but the lady at Jalan Sultan claimed hers is the one that people always look out for during these occassions. I don't know who started sotong tutuk. It must take quite some imagination to turn an already dried sotong into something which is what it is today. I would love to hear from readers if you have any knowledge of that. So far my research has come up zilch. 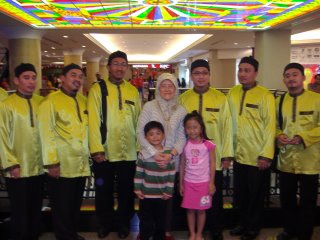 And our day was topped by seeing the Malaysian group, Rabbani performed at the Mall. We were there to have a birthday celebratory dinner at Sanur Restaurant (might be my palate - but I thought the food was overly salty) and we were pleasantly surprised to see them performing live. The group was very friendly and a number of fans queued up wanting to take photographs with them. Rabbani was here for the official opening of the Mall and the Rizqun International Hotel. The last time I saw them was at the Amphitheatre in Jerudong. It's always nice to see them.

So there you go. Another useful Sunday in Brunei.

Anonymous said…
Hey Bro, Assalamu'alaikum.. It's good now that you have a great following :) Anyway, that squid photo you have, I kinda laughed looking at it. It has a similar resemblance if you know what I mean hehe.. Keep up the good job! Cheers.
Tuesday, July 11, 2006 7:52:00 AM

Anonymous said…
Assalamualaikums.. hey I just stumbled upon your blog... and I like it. Bookmarking... boomarking... Done!
Oh and nice info on the longans btw. No wonder i dont have many stomach aches as I love eating longans. Nice to know I dont have many worms in my tummy cos of it. Here is something I like to share with you all.. Everytime I order longan drinks... I ususll request a lemon slice with it.. . VERY NICE!! Try it ;D
Tuesday, July 11, 2006 8:18:00 AM

BRUNEI resources said…
to 3 stripes: thanks ranz, you have a hand in increasing the numbers (averaging 400 pageloads a day now). the squid photo is very interesting, i thought of taking a closer view of the drawing but i thought better not - i don't want to lose my family ratings!