News from the Past: Erecting the TV Tower in 1974 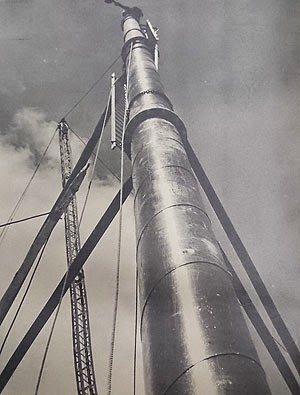 BANDAR SERI BEGAWAN (November 30, 1974) – Money is no object in the race to get Brunei’s giant television transmission tower (photo) into the sky and completed by the end of the year.

It has cost about $100,000 a time for two special charter flights to fly in the prefabricated steel sections of the 400ft tower from France.

And the overall cost of the project atop Bukit Subok is expected to be more than $500,000.

To put the giant tower together, a seven-man team of expert riggers from the British firm of Alan Dick and Co has flown out.

They know their job – the tower is already up more than 200ft, and is climbing at the rate of 100ft a week.

The men are working sun up to sunset, seven days a week. Heavy sections of steel, some weighing as much as two tonnes, have to be winched up and bolted into place by the men perched precariously aloft on the tower.

Adding to the difficulty is the fact that the sections are rounded and present no flat surfaces to give the riggers a safe footing.

Everything about the work is a rush-rush job.

When the tower was originally ordered, nobody in Britain could produce the required prefabricated sections in time.