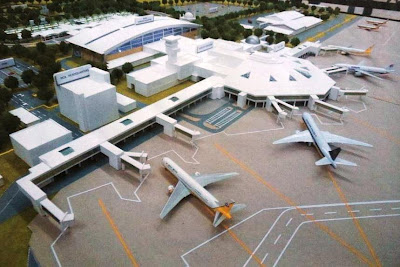 A foundation stone laying ceremony for the Modernisation Project of the Brunei International Airport was held this afternoon for the airport's new arrival/departure terminal building. Yang Berhormat Pehin Orang Kaya Hamzah Pahlawan Dato Seri Setia Awang Haji Abdullah bin Begawan Mudim Dato Paduka Haji Bakar, Minister of Communications as the Guest of Honour at the ceremony held at the proposed site for the new Arrival/Departure Hall said that "by 2014 Brunei International Airport will be an iconic International Airport, prominent to the world with its Malay Muslim Monarch identity". The event commemorates the casting of one of the major columns supporting the massive roof for the new Arrival/Departure Hall.

The concept design of the airport expansion project which began at the end of 2010, is undertaken by a Singapore consortium, Changi Airport Consultants Pte Ltd/AECOM Asia Co Ltd and the contractors appointed for the construction works are Trans Resources Corporation Sdn Bhd JV Swee Sdn Bhd. Aimed at improving the existing environment and appearance, the project is expected to enhance convenience to passengers and the public through the expansion of floor areas, the development of iconic structures and green features, as well as the installation of a much improved security system. The project, when completed in approximately 36 months, will see the Brunei International Airport improving on the quality of its services by emphasising on public convenience, safety and comfort.

In its announcement, the Brunei Economic Development Board (BEDB) and the Department of Civil Aviation (DCA) on the major construction works on the modernization of Brunei International Airport terminal is on track. Airport users and passer-bys will observe the construction of the columns and roof structures in coming months. The BEDB and DCA will ensure the smooth operations of the airport during the construction period, continue to implement safety measures including changes in road traffic and passengers' movement within the airport area.

In addition, BEDB and DCA would like to seek public cooperation and consideration while encouraging outbound passengers to plan their travel & departures in advance. Both agencies will also ensure that the public and other stakeholders will be well informed in advance of any other major works undertaken at the airport.

Pg Adnan bin Pg Badaruddin, Acting Director of DCA in his opening remarks stated that this major expansion project is one of the objectives of the department aimed to develop Brunei International Airport as the regional hub that will ensure both safety and security for all air travellers or passengers and/or airport users and with the upgraded aviation safety system, facilities and services.