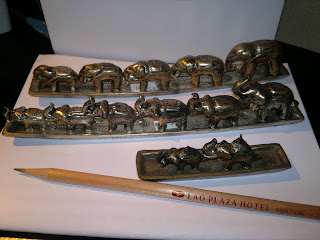 When I was going through the stalls in Vientiane, Laos I saw a number of vendors selling tiny little silver elephants. A set of five tiny elephants with its little plate were being sold depending on your bargaining expertise for between 250,000 to 300,00 Kips, Laotian currency. US$1 is worth about 7,597 Kips according to the exchange rate at the hotel and my officers told me that is about the same at the money changers. I bought a set of 5 tiny elephants at the hotel for US$40 which works out slightly expensive at about 320,000 Kips and no bargaining.

What I like about the tiny elephants were its historical values. I was told that these tiny elephants once served as the currency in the old days. I guess why not? Rather than minting coins, why not make elephants? Brunei in the past did the same thing too. Bruneians used even heavier metal and bigger models too. For those who do not know, small hand held cannons were once used as currencies in Brunei. 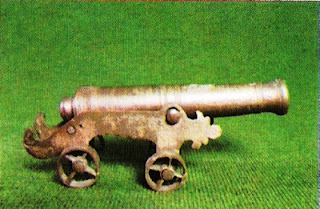 The other reason why Laotians go for elephants is that elephants are very much revered in the past. The original kingdom Lane Xang founded in the 14th century was also known as the Land of a million elephants. The name was established in 1354 by King Fa Ngum because the old capital of the Kingdom was Luang Prabang and it was surrounded by large grazing pastures for wild herds of elephants. Also elephants were used as the principal engines of war and a transport for the Lao Royal Family back in ancient times.

Asian elephants loved Laos as their home because the country used to have extensive forest and crops and a sparse human population. However, due to modern day wars and bombs which have scared the elephants away as well as forests being cut down resulting in less food for them, the elephant population in Laos and our proud national heritage is dwindling fast.

Elephants were a dream for every elephant lover visiting Laos, but today they are scarce. Laos is now thought to have only 700 elephants left in the wild.

Tamed elephants are used for heavy work, such as pulling large logs. Most spent all their time working and had little opportunity for reproduction. The authorities are trying to reduce the workload of these elephants in hopes that their numbers would increase.

Elephants will always be an important part of history and appreciation to Lao people because these large beasts was a vehicle for transport and work for centuries. The 3 headed Elephants were contained in a Lao flag during the monarchial times that represented Lao unity between Vientiane, Luang Prabang, and Champassak.
﻿