June 16, 2010
For the last two days, we have been been spending our time at the Empire attending the Alternative Energy and Energy Efficiency Seminar conducted by the Brunei Think-Tank Centre for Strategic and Policy Studies (CSPS).

On Monday afternoon, there were a few speakers talking about the various alternative energies. The tidal wave, the solar powers, the wind power etc. Unfortunately despite the various alternatives, none seemed to be able to fit the bill. For instance wind power - not windy enough. Besides the two speakers were very technical and some people just gave up listening. Then the last speaker from Canada goes up. Compared to the other two, he was very clear and despite being an obvious nuclear power advocate, he was still able to be very articulate about it. Everyone just got sold on Nuclear Power! 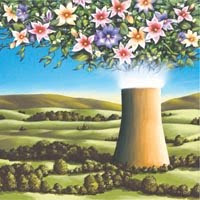 Bandar Seri Begawan - Nuclear energy in Brunei is possible and can be done at a low cost, according to a Research Director at the Canadian Energy Research Institute.

"Nuclear in Brunei is a possibility. It could be done at a relatively low cost with a small reactor," said David McColl who was in Brunei yesterday to speak at the energy conference hosted by the Centre for Strategic and Policy Studies.

During a session on alternative energy strategy, McColl suggested that Brunei may want to reach out to companies like Toshiba or Mitsubishi and to be the "first out of the gate" with a small reactor designed at a low capital cost. This, however, was met with apprehension by some panellists and participants not keen on Brunei turning into a "test subject" for low cost small reactors.

According to McColl modern communication technology enables for the remote operation of small reactors.

Furthermore, McColl emphasised that the nuclear reactor will in fact address the biggest issue faced today by the energy industry - environmental sustainability.

"Nuclear energy will allow for a transition away from natural gas and towards a plentiful source of energy," he said, asserting that nuclear energy not only has zero greenhouse gas emissions but, on a life-cycle basis, it is cleaner than both wind and solar technology.

In his presentation, he also doused popular misconceptions of the risks of nuclear technology explaining, "nuclear energy is a safe and affordable option for Brunei" and reiterating that "nuclear energy can help Brunei meet its modern energy needs with lower costs and higher reliability".

While the issue of nuclear technology remains novel for oil-rich Brunei, it is, however, a matter of increasing interest, as talks of nuclear energy have not been isolated.

The issue will also be highlighted at the National Environment Conference in July.

The two-day conference kicked off yesterday at the Empire Hotel and Country Club and will continue again today highlighting issues in promoting energy efficiency in transportation in Brunei Darussalam. -- Courtesy of Borneo Bulletin

Despite being sold on it, there were obvious questions. Like, if it's that good, that reasonable, available, why are there no takers? How much is the real operation cost? What do we do with the spent fuel rods? Etc... Etc... But you know, despite my misgivings, I still think nuclear energy has the power to do what we need. What do you think?

Jin Yang said…
Thanks for sharing.. this is interesting..

I think the issue with nuclear is not a technological one. The world has a huge problem with actual risk and perceived risk. The public's perception is often warped by past experience, media etc and to be fair, nuclear does not have the best reputation among the 'alternative' sources (considering events such as Chernobyl).

I think the obstacles to having nuclear energy will ultimately still be political one.
Wednesday, June 16, 2010 1:51:00 PM

Anonymous said…
In regards to your questions. The speaker ruled out large reactors and emphasized small reactors, with a particular comment on the Toshiba 4s. Irrespective of the small reactor, one of his comments about spent fuel was that the fuel would be leased, and thus sent back to Toshiba/Japan after the 10 to 30 years of operation. In other words, not Brunei's problem; Toshiba will "recycle" the fuel into more fuel rods (only 3 to 5 percent of the fuel is burned each use).
Operating cost is about 25% of total cost, around 1.5 to 2.5 cents /kw (US). Total cost, with rate of return is around 6.0 to 10.0 cents per /kw... if this was a government owned facility the return would be much lower pushing costs down to 3 to 6 cent a kw, comparable to current prices.
Smaller reactors also dramatically reduce the risks of an incident and the 4s is designed for simplicity, futher reducing risk. Risk is blown out of proportion and wind risk is ignored. But, I'm not from Brunei and perhaps turning having wind turbines destroying the landscape and dead birds nearby would make people happy.
The public perception battle will begin, and hopefully it will be positive. Unlike all the alternatives discussed, only nuclear can create an export market (isotopes and unique expertise).
Friday, June 18, 2010 8:48:00 AM

jatwee said…
In my opinion, nuclear energy should be the most efficient option.
We do not need a huge reactor power our national grid as noted by the speaker.
I think a review into how a nuclear plant can built should be done as soon as possible. This is as building one takes a long time, especially in a country void of any previous experience with it, the intial capital cost is huge. There will also be the issue of location and connection to the existing grids, no doubt more wires to laid out if location was to be in tutong for example.
Security of the plant would be another issue.
Most important, imo, would be the operational technical skill needed.
Maybe they would be something for physics scholars to aspire to instead of turning them into just educators.
Sunday, August 22, 2010 10:20:00 AM

Anonymous said…
hmm.. again besides the environment impact Brunei does not have the resources i.e. uranium to run a power plant. biomass perhaps?
Thursday, October 28, 2010 6:37:00 PM

Anonymous said…
brunei should you use geothermal energy, radioactive free and no pollution, last longer till "hari kiamat" lol. Its the infinite heat energy of the earth.
Monday, January 10, 2011 1:16:00 PM

simvastatin67 said…
I am just concerned that nuclear energy may pose a higher risk of exposure to harmful radiation in the country, meaning a higher risk of cancers, congenital abnormalities, and so on....I suppose we can try a little bit harder on harnessing 'green energy' in the country, there must be some way to achieve a solution -- especially with the new advancement of technology these days, everything is possible.
Tuesday, September 13, 2011 3:37:00 PM