June 05, 2010
I have to admit that it is interesting that the World's Local Bank CEO has been keeping a vigil at this blogsite. But with all good things, I have to let him rest and post a new posting. It is interesting to know that that all my calls to my bank apparently is rerouted thousands of miles to my mother's home country. If I had known that, I would have used my other accent every time I called in, that way I wouldn't have gotten the run around. I have only one suggestion - give those folks at the call centre, a new map of Brunei. One that shows clearly the different districts in Brunei. 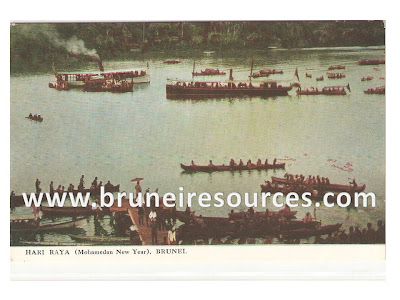 This one interestingly enough had a caption that says "Hari Raya (Mohemedan New Year) in Brunei". I am not sure where all these people are going. If presumably Hari Raya is around that time, then everyone is going to go to the mosque. With these many people, the only big enough mosque which everyone can go to would be the Masjid Pekan Brunei. Remember this one got burnt down during the second world war before another was being 1958 which is the currently Sultan Omar Ali.

Anonymous said…
Salam Bro BR, this postcard and the previous postcard could be somewhere not in 'Brunei' itself. They could be somwhere in 'North Borneo' and Sarawak which were at the time still under Brunei's Sultan rule. Notice in the previous postcard that many people were wearing the colonial uniform and the british flag was waving. Where can we find lots of boats in the latest postcard? I only know one place that is Jesselton.
Sunday, June 06, 2010 6:19:00 AM

BRUNEI resources said…
Interesting, unfortunately the time frame is not correct. By 1920, Brunei is down to the current size and nobody would call any other place as Brunei anymore.
Sunday, June 06, 2010 7:14:00 AM

I have some postcards which shows some scenes in Brunei showing Mount Chinese Widow or in malay Gunung Kina Balu in 1800s.

BRUNEI resources said…
Sarawak was ruled by the Brookes and Sabah was ruled by North Borneo Company. In Sabah, the capital then was Sandakan and not Jesselton.

Anonymous said…
Ok but still those countries Sabah and Sarawak belonged to Brunei back then...Sabah is the tulin rights of the Sultan while Brooke actually rule Sarawak under the Brunei Sultan's umbrella...anyhow let our historians do a further study on that part of our history...as for the postcards let me think about them first..no rush to sell them yet hehe...
Sunday, June 06, 2010 12:10:00 PM

Anonymous said…
Salam, its very intereseting to see all these old traditions and kind of sad to see them not practiced anymore. The government should do something to help remind us of these olden times simila to other conntries so as to not get lost in 'modernisation'.
Monday, June 07, 2010 8:56:00 AM