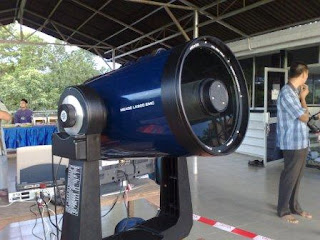 I guess everyone heard it already by now. There is time to have breakfast this morning and lunch this afternoon. Our fasting month starts on Tuesday and not today. In fact I knew it much earlier than everyone else as I was part of the crowd which went up Bukit Shahbandar and studied the sky intently to see whether I can see the little sliver that makes the new moon.

I learnt a lot today. First of all I learnt that yesterday was the right day to rukyah (sight the new moon) as the 'conjunction' happened yesterday's dawn. The conjuction which is the 'birth of the new moon' is when the sun, the moon and the earth are aligned. The new moon was supposedly to be sighted for approximately 19 minutes after the sun has set. The moon was about 4 degrees higher than the horizon. However because of the glare of the sun despite it being under the horizon meant that the new moon was not visible even though it was there. It was not visible from the other sites around Brunei - Bukit Shahbandar, Bukit Agok in Tutong and Bukit Lumut in Seria.

For countries using falaq (calculation), they will start their fasting today. Some of them such as Malaysia uses a criteria that as long as the new moon was about 2 degrees higher when the sun has set despite it being not visible, the authorities can declare that according to falaq, the new moon was there and therefore fasting can start.

According to the officers at Survey who has been recording the new moons, by experience, for the new moon to be visible, the difference between the sunset and moonset has to be 40 minutes or more (yesterday was 19 minutes) or the new moon has to be around 20 hours old (yesterday was 14 hours). I was told that the new moon for Syawal or our Hari Raya will be 1 hour+ for the difference between sunset and moonset and also the new moon will be more than 20 hours. So the chances of sighting the Syawal new moon will be there. BUT... there is a but. If on that day, there are heavy clouds or rain, those can obscure the new moon. So, we still have to wait and see. I will be there again.

Sehat said…
Thanks for the very informative post. We hear experiences from other countries regarding this, nice to hear something from Brunei.

What ever happened to the thing about getting Brunei, Malaysia and Indonesia to have same dates? Was it because of the delay getting news from other countries?
Monday, September 01, 2008 7:37:00 AM