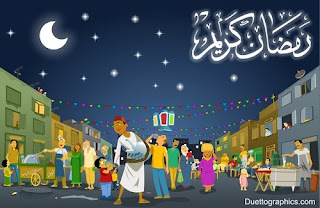 [Note: This is taken from my Golden Legacy column published last Sunday, 31st August 2008 on Brunei Times. I only took half of the article.]

The daily period of fasting starts at the breaking of dawn and ends at the setting of the sun. In between -- that is, during the daylight hours -- Muslims totally abstain from food, drink, smoking, and marital sex. The usual practice is to have a pre-fast meal (known as sahur in Brunei) before dawn and a post-fast meal (iftar or better known in Brunei as Sungkai) after sunset.

Timing is an essential component of fasting. Knowing when Ramadan begins or when Ramadan ends and marked the beginning of Syawal are important to the month of Ramadan in Brunei. So much so that Brunei has its own moon sighting hills throughout the country. In Brunei, the sighting of the moon is also a cultural event in itself and socio-cultural event located in Brunei Darussalam.

Sighting of the moon becomes very important in Brunei that not seeing the moon can be quite a disappointment. Why do we sight the moon?

The fact is that this argument centers around the hadith of Prophet Muhammad SAW as narrated by Al-Bukhari which stated that "Do not fast unless you sight the crescent, and do not break your fast till you sight the (following) crescent." This pretty much is what is followed in Brunei that we have to sight the new moon regardless.

The moon sighting hills in Brunei are scattered throughout the country and are busy not just to sight the new month of Ramadan and Syawal but also used for certain other month such as Syaaban. But in the past, this was not so. Sightings were conducted at the minaret of Sultan Omar Ali as it was considered one of the higher places in Brunei Darussalam.

Once the new moon was sighted, this will be presented to His Majesty The Sultan and Yang Di-Pertuan of Brunei before it is announced. Even if the new moon is not sighted, it will be announced. Many Brunei eyes and ears will be seeing and listening to both the televisions. This has been a tradition of the Brunei past and present.

If the new moon was not sighted in the old days, a number of Bruneians would ignore the official announcement and would prefer to follow our neighbouring country with regard to the start and end of Ramadhan. This practice carried on until the 1970s – there would be a number of Bruneians who will not be fasting if Hari Raya was being celebrated next door.

At midnight, the cannon will be fired once again to mark or to remind the faithful that they can now have their sahur or pre-fast meal.

For those not living in the town, there will be other instruments. Some villages have ‘badok’ or drums which are beaten by the village folks. These ‘badok’ are essentially part of the mosque and in some old drawings on Brunei, the badok is indeed an essential part of Brunei. Even nowadays, the traditional ‘badok’ sound is still played on radio to indicate that it is time to break the fast.

However there will be those who will be guessing the actual time of the break. Some of the methods employed can be quite primitive. It was said that some look at the leaves of the ‘pechola’ or ‘labu’ which are said to curl up in the evening.

Some look at the hair on one’s arm and if it is no longer visible, then you can break the fast. Some even listen out for the sound of a kind of worm. Whoever has determined the time, will usually shout out to their fellow neighbours to tell them it is time for sungkai.

In some sophisticated villages, a volunteer village crier will go out and beat his rabana or his small drum to let people know that it is time to break the fast (sungkai) or it is time to get up and consume the pre-fast meal (sahur).

But they will be those who will not be able to wake up on time. Today, Imsak (the ten minutes’ gap before the dawn prayer, Subuh), the time for Muslims to stop consuming food is clearly indicated in the calendar.

However before calendars were available, Bruneians guessed when imsak was. Some carry out the practice that one can still consume food until the first light of the day can be seen. Some waited until day has dawned.

There are also others who rely on the crow of the rooster. If the rooster has not crowed, then it is not dawn yet. Though scientifically, it has been proven that cockerels do crow at dawn and are fairly accurate. But they do crow at other times of the day too.