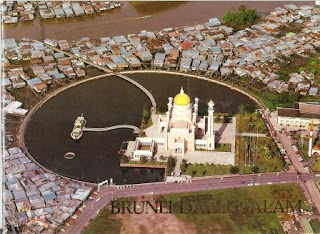 When I wrote about yesterday's entry I mentioned a book which I bought recently. That has aroused some curiousity as to which book this is. This is the cover of that book. All I know is that this book was produced for Fitzpatrick's (the forerunner to today's Smart and Supasave) and sold there. I did not remember this book myself. But the censor board people at the Post Office remembered this book (I bought this book by post and had to pass it to the censor board for approval before taking the book out) said she remembered seeing this book being sold at the supermarket's shelves.

All I know is what's printed inside. This book was produced in 1984 capturing scenes of Brunei 24 years ago. Some of you may think that's old but to me, this was just like yesterday. Anyway, it had two photographs which I remembered very well. 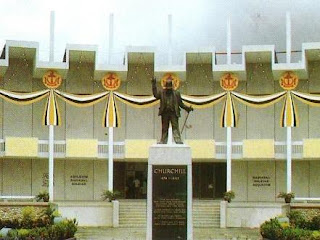 The photographs are about Churchill Museum. This is what the front of the Museum looked like with Churchill's statute. But what I remembered best about this museum either than just to see memorabilia of Churchill but also to see the Aquarium next to it. This was then the only aquarium and you go in there in the dark just to see the many fishes there was in Brunei waters. Admittedly the museum was a far cry from the Aquaria in KL or the Underwater World in Singapore or even the London Aquarium. But at that time, it was the most enjoyable thing I have seen. 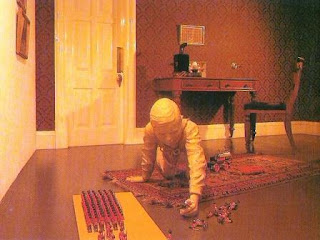 But the Churchill Museum holds exciting things. I like the best was the diaroma of model soldiers which Churchill played as a child. That was the most fun. This photo shows just one such example of Churchill playing with the toy soldiers. There were a few more models like this, I remember.

The most famous was a recreation of London being bombed during World War II. I remembered in the 1970s when the museum was first opened, there was a queue to the red button that played this bombing scene with all the sounds of the bombs dropping on London, sirens etc. It was fun.

Chalks said…
I remember being really excited going to the aquarium. Back in the 80's if i am not mistaken it cost around $2 to enter (not quite sure).

stormtrooper said…
Churchill Museum was the only museum dedicated to the war minister of Britain. Showing picture of the mannequin playing the toy soldiers does bring back memories. Enjoy the place.
Monday, September 08, 2008 1:16:00 PM

Jasmine said…
I remember going to the Churchill Museum and pressing the interactive buttons to see London being bombed! The aquarium as well as huge fish ponds surrounding the biulding that were teeming with kois if I remember rightly, were always a treat to see and it was our first encounter with sharks, ya they actually had one in the huge tank!!...I wish the aquarium could be brought back as I'm sure all our children could learn a lot from the exhibits. As for the Churchill statue, I think he is now standing in the garden of the residence of the British High Comm. Although I could be wrong! Anyway Thks for reliving some fond memories!
Monday, September 08, 2008 7:58:00 PM

Z F Maidy said…
BR once again thanks for a refreshing look into the early 80’s. I’d like to add to this with my recollections of the late 70s. I remember seeing a clip on Brunei TV (we only had 3 channels back then) in which a man drew an outline of what turned into a red sports coupe, in a scene that was set in front of the museum compound. It may have been part of a road safety campaign, but I as a kid was fascinated with the novel camera trick. I remember the wording “Churchill Memorial Museum” at the entrance of the gallery, and that there was a thick open book in the middle section of the multi-level hall. There was also a small library in the complex, separate from the Churchill museum and the aquarium. I may be mistaken, but the museum depicting Brunei’s royal history had been there right from the start, situated at the other wing of the crescent-shaped complex. Churchill’s statuette, meanwhile, was surrounded by several low-slung hedges with local flowers and knee-deep ponds that were home to hundreds, if not thousands, of tropical fish. The whole place had a “modern art” feel to it, and it was one of the most interesting tourist attractions at the time.
Tuesday, September 09, 2008 4:18:00 AM

Rozi said…
I love the place. Seeing the fish and the dioramas. I thought it was the most exciting place to visit. It's a pity it doesn't exist anymore. I always wondered what happened to the content? Did they get sent back? Or holed up somewhere collecting dust and falling apart? And what happened to the marine life?
Thursday, September 11, 2008 9:35:00 AM

Anonymous said…
this post is great! the post and the comments really brought back a lot of happy memories to me :)

I do like the Royal Regalia Museum now, and i wish the authority had built another building for Royal Regalia Museum instead of using the Churchill museum. before reading this post, I can only remember the sea turtles in the aquarium!
Monday, September 15, 2008 3:15:00 PM