The Historic Padang Besar in Bandar 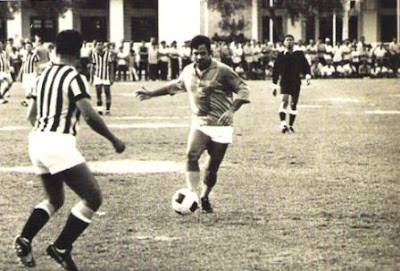 [Note: I wrote this article about Brunei's Padang Besar or nowadays known as Taman Sultan Haji Omar Ali Saifuddien for Brunei Times edition 22nd June 2008. Many events used to be held at the Padang including His Majesty playing football there.]

The Padang Besar as it used to be known or simply translated as the ‘Big Field’ is now officially known as Taman Sultan Haji Omar Ali Saifuddien named after His Majesty’s late father who was the 28th Sultan of Brunei Darussalam.

The Padang has been in existence for at least a hundred years. In his book, ‘The City of Many Waters’ published in 1922 but talking about Brunei at the end of the 19th century, Peter Blundell described the following ‘.. at the back of the town behind the Sultan’s palace was a large plain known locally as the Padang, an ideal site for a big Malay town .. and that the town of Brunei be gradually moved to the Padang ..”

The first British Resident, McArthur noted in his report that he wanted a clean, dry village with suburbs of kampong houses and he wanted to discourage building on the river. With those policies, development on dry land abound. Surprisingly the Padang kept its place as the big field as development grew around it.

A group of Chinese businessmen moved out from Kampung Pekan Lama (then known as Kampung Bakut China) which served as the business area in Kampong Ayer, and started to build their shops on dry land. In 1910, there were six shops, the year after, in 1911, there were 26 shops and just before the Second World War in 1941, that number has increased to more than 80 shops. 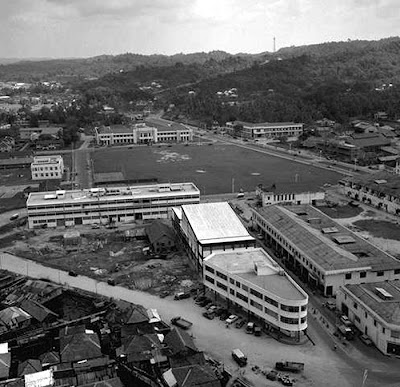 [The Padang in the early stages of Bandar's development.]

Up to the 1980s, many water villages retained their positions surrounding the Padang. Technically they were on dry land but during high tides, the houses would be on water. However these houses were demolished, firstly during the construction of the Sultan Omar Ali Saifuddien Mosque and secondly during the construction of the current buildings belonging to Yayasan Sultan Haji Hassanal Bolkiah. Village names that used to be there that are now slowly becoming memories include Sultan Lama, Bendahara Lama, Pemancha Lama, Sungai Kedayan, Pemukat and Sumbiling Lama.

The Palace of Sultan Muhammad Jamalul Alam was in Kampung Sultan Lama. It was known as Istana Kampung Air. His Majesty Sultan Omar Ali Saifuddien was born there on 23rd September 1914.

The Padang itself was the sentinel for the development around it. It itself was not always a field. In its early days, it was used for grazing cows and cattles. It was a muddy plain field and many cows were kept there. Even in the latter days, when it was no longer used by cows, cows were still kept there prior to them being transported to the ‘pound’ to be slaughtered in Kianggeh.

Bruneians living around it slowly transformed it into a proper field that can be used for many events. Football was one of them. A number of Brunei’s historic victories were played there including when Brunei won the Borneo Cup. Another historic game included the defeat of Singapore then at the top of the Malaysian Cup league. Football games stopped when the National Stadium was completed thus taking away Brunei’s main advantage – playing on a muddy field.

In the 1950s and 1960s, the Padang was especially utilized for ‘Hari Besar’ or ‘Big Day’. Everything would be held at the Padang. The big procession for His Majesty’s birthdays, the firework displays, the performances, the fun fairs and the nightly stalls.

The stage shows and performances then were almost unlimitless. There were singing, dancing, drama, cultural events, magic tricks and ronggeng. The fun fairs and stalls would have many types of games that would require participants to throw, to shoot, to fish and to do pretty much anything to win. There were many varieties of food and drinks as well. One would just need money.

Before the completion of the SOAS Mosque, Eid prayers would be held at the Padang with His Majesty Sultan Omar Ali himself as one of the many devout Muslims praying there.

Developments surrounding the Padang include the Secretariat Building on its east wing and the Jardine Wharf building on its west wing. The Padang also saw the first cinema, first described located on its west wing before moving to the site of the current Dar Takaful Building. The first cinema was interesting that many of its patrons would ‘book’ seats by tying handkerchiefs to the seats. Many others would huddle around the building including making their own peepholes watching the movies through the peepholes.

The latter cinema called the Boon Pang Baru was even used as the detention centre for the 1962 rebels. The rebels were first held in the tennis court which was located at the north wing of the Padang. The tennis court was part of the police compound complex with the police station located in the centre of the north wing. That police station together with all the police barracks and facilities were demolished when the Padang was enlarged in preparation for Brunei’s Independence held on the eve of 1st January 1984. 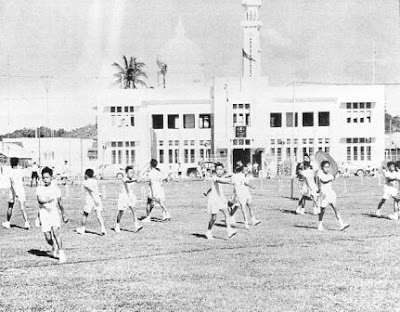 The Brunei’s Independence Declaration was read at the Padang and many Bruneians were there during that historic occasion. Brunei’s National Day celebrations continued to be held at the Padang until today.

On the Padang’s South Wing was the Civic Centre building which also housed many government departments before being acquired by TAIB to be its headquarters today.

In October 1970, Brunei’s capital of Brunei Town was renamed Bandar Seri Begawan. The ceremony was held at the Padang. Today at the south wing of the Padang is a small park built in memory of that occasion.

The Padang Besar now renamed as Taman Sultan Haji Omar Ali Saifuddien has seen many things and will continue to see many things in the future, fitting with its position as the Padang Besar or the Big Field. Its iconic position and its importance in Brunei’s history will remain for a long time.
golden legacy history