June 17, 2008
[Note: The following article was published on Sunday in my Golden Legacy column on Brunei Times. I got rapped by the economic planning people for calling the ninth RKN, the ninth RKN and despite that being the ninth RKN, it should not be called the ninth RKN. I guess them planning people used a different numerical scale. Heh. Anyway, it is officially called RKN 2007-2012. By the way, the code in the budget book for RKN 2007-2012 starts with the number 9. I guess the finance people used another numberical scale. The illustrated photo accompanying the article is that of Kuala Belait in 1955.] 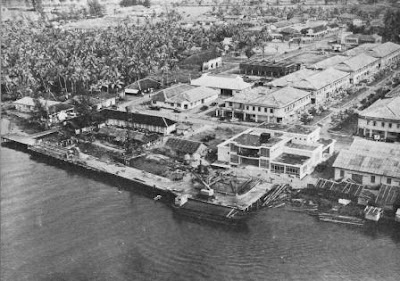 On 4th June 1950, Sultan Ahmad Tajuddin passed away in Singapore due to a haemorrhage. His brother, Pengiran Bendahara Omar Ali ascended to the throne two days later.

The ascension of Sultan Omar Ali Saifuddin III as Brunei’s 28th Sultan can be considered one of the most significant milestones of Brunei’s history. His ascension marked the beginning of the modern Brunei as we know it today. It was His Majesty’s contribution that led to the political and infrastructure development of modern Brunei.

Under the guidance of His Majesty, Brunei’s status as a British Protectorate was changed to self rule with the British Resident replaced by a British High Commissioner. His Majesty reinstated the Sultan’s internal sovereignity making him the supreme executive head of the Brunei’s government.

He introduced the 1959 Constitution ending the British Resident’s authority in Brunei. Brunei’s self rule meant that it is now Bruneians that rule the country even though its external affairs and defence was conducted by the British.

He granted permission to build mosques and suraus throughout the country as part of his efforts to expand and strengthen Islam in Brunei. The most significant landmark was the Omar Ali Saifuddien Mosque which was opened in 1958.

However one of his most important contributions was the introduction of the five year national development plans. Until the Second World War, Brunei has made steady economic progress. This would have continued had it not been for the war and the dastardly deeds of both Japan and the Allied Forces. The Japanese bombed and razed to the ground Brunei Town and Seria. Then the British and the Allied Forces bombed the Japanese installations as well as raze the remains of Brunei Town.

When the Australian moved in, in 1945, the only building left standing in the city was a Chinese temple. Everything else in the city, Brunei Town were blazing ruins with oil wells filled and fired in Seria Town.

The first duty of the government was to feed and restore the bare necessities of the people. Rehabilitation of Brunei Town was also started. In the period after the War, nearly 200 shop houses were rebuilt as well as new government offices. By early 1953, Brunei showed few signs of the war. However the government felt that a long term development structure was needed. So a 5 year national development was conceived and launched.

The first national development plan was launched in 1953 and covered the 5 year period from 1953 to 1958. The main objectives of the plan were to bring Brunei out of its lowly status in Southeast Asia; to modernize Brunei within the framework of the Malay Islamic Monarchy; to improve the living standards of Bruneians and to develop non-oil and gas industries.

A British expatriate by the name of ER Bevington was appointed as the Commissioner of Development. He was then working in the Colonial Office in Fiji. As Commissioner, it was his responsibility to carry out the new plan worth $100 million with the funding voted by the State Legislative Council.

What did that $100 million supposed to do?

The first national development plan gave special emphasis on the expansion of education and medical services; the implementation of resettlement schemes; the provision of water supplies; the improvement of agricultural methods and fisheries; the extension of roads and communications; the construction of bridges, buildings and electrical stations; and the installation of broadcasting and telephone systems.

More than 59.78% of the budget goes to infrastructure development with Health, Education and Welfare with 21.77% of the funding.

The plan also identified that Brunei should start diversifying its economy and not to be dependent on the oil industry. The plan identified several schemes including better use of waste gas; improving agricultural methods; the replanting of rubber and more focus on the fishing industry.

Unfortunately most of the plans to diversify the economy did not work. The waste gas was supposed to help start an aluminium industry and the manufacture of cement and nitrogen fertilizer but the projects did not materialize. Rubber prices fell drastically after the Korean War and the plan to replant rubber immediately failed.

But most importantly the plan also focused on improving the social welfare of Bruneians. The living standards of Bruneians improved tremendously. A pension scheme was granted under the plan to persons over 60 and the disabled. The scheme is still in place and enjoyed by many Bruneians despite not having to contribute anything to the scheme. The scheme which originally pays $20 per month in 1957 now pays $250 a month to any Bruneians who have reached the age of 60 and to those who are disabled.

Many of the important buildings and infrastructure Brunei was conceived and built during the first national development plan. This included the trunk road from Brunei to Tutong to Belait with all its bridges. The new wharves at Brunei town and Kuala Belait were built. Muara was also studied as a potential port for the future. The first airport at Old Airport was conceived. Automatic telephon exchanges were built in Brunei and Kuala Belait. More than 30 new schools were also built during these times. A new hospital at Kuala Belait was also built.

Last year, the Ninth National Development Plan for 2007-2011 was presented at a meeting of the Long-term National Development Planning Board. The Ninth NDP for 2007-2011 succeeded the 8th NDP which ended in 2005. This time, the Government allocated a total of $7.3 billion for the Plan and placed emphasis on the diversification of the national economy especially in the non-oil sector.

At the same time, His Majesty had also set up the Long-term National Development Planning Board whose role is to provide a framework and development plan for a period of 30 years beginning with the 2006 financial year.

The Government’s National Development Plans are now widely anticipated by economic observers and investors as they generally outline the focus of economic development of the country for the next five years.