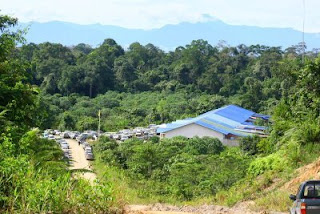 Last week, I was accompanying my Minister for a Hari Gawai celebration at Bang Toang located at Mukim Sukang, Belait. I am not really sure how far Bang Toang is but I would say it is a good 150+ km from Bandar. You have to drive left at the Sungai Liang simpang. Then drive until you see the Sungai Mau/Merangking simpang and then drive through there all the way to the southern end of the Belait District.

First the road will be like what you and I used to see before turning into a rock covered road and finally a sand covered road and by then you can forget about sleeping in the car. The road bumps gets one's bums off the chair every few seconds and at places you can see that the road has eroded away that you wonder how the 4 wheel driver can actually drive through it. In the rain, you can forget about driving as the roads will turn into liquid mud.

Why has not the government improved the roads? It will be. It is part of the next RKN. Other than the Bang Taong longhouse and another longhouse, about 25 minutes drive further south and into the interior of Brunei, there are no other residents. Even the Bang Taong longhouse, during normal days, when the residents are all away working and studying in KB or elsewhere, we were told that only about 8 to 10 elderly people stayed there. The roads are difficult to maintain to a good condition because they are used by logging trucks.

The Bang Taong longhouse is a completely modern longhouse (see photo - the cars there are all MOD, PWD and the District Office's four wheel drives). It actually resembled more like a terrace house but with a common corridor or rather common hall where everyone can run and used it as they like. I was surprised with the opulence of some of the quarters. The Ketua even had a big chandelier in his quarters though with electricity generated with a small generator, the bulbs barely lighted!

I had to go do a tinkle and I went into one of the toilets and the owners apologetically said there was a chicken in there. There was no attempt to take the chicken out when I went in and I was wondering whether I should. But I decided not to do anything. So I did my thing and the chicken cocked its eyes and me and I was wondering what it wondered. One of my colleagues went in next and he too told me that he was wondering what would happened if the chicken had flown up or start pecking at the sensitive part. I guess the chicken must have been fairly stunned by the succession of people doing their things with all shapes and sizes....

We had a great time and our gift was a thick document full of requests on how to make life better for the residents. The residents were genuinely pleased to see us and it makes the three hours drive and occasional bumps to our heads by the jolting drive there was all worth it.

Unknown said…
Dear Hj. Rozan, pls accept our belated thanks n appreciation for the beautiful Brunei souvenir & foodstuff you've kindly presented during yr visit to Tehran last month. I found its quite relaxing to listen to those Iranian songs while enjoying/reminiscing all those nostalgic events n experiences of our beloved Brunei. Very informative n valuable indeed. btw, I really like yr "chicken in the loo" incident...!!
Saturday, June 28, 2008 2:10:00 PM