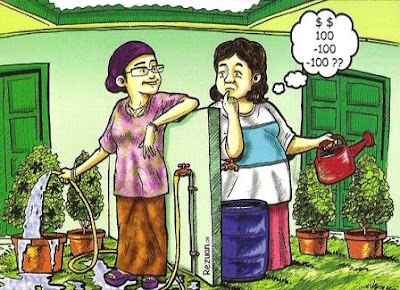 In Brunei, not many people realised just how much water we used that the possibility of running out of water is not an impossibility. I remembered sometime last year, the Minister of Development, now my Minister, stated in a speech that each of us Bruneians consumed almost 400 litres of water per day or the equivalent of about 300 bottles of SEHAT water every single day. What is that in comparison to our neighbouring countries? In Singapore, each Singaporean only consumes 160 litres a day, in Hong Kong 203 litres a day and in Tokyo, the Japanese only consumed 260 litres a day. So 400 litres is a lot of water to be consumed by us Bruneians. You may want to ask yourself why that is so. Is it any hotter here compared to Singapore? Or are we any cleaner, say, compared to the Japanese?

Last January, when U.N. Secretary-General Ban Ki-moon addressed the World Economic Forum in Davos, Switzerland, his primary focus surprisingly was not on the impending global economic recession but on our world’s growing water crisis. “A shortage of water resources could spell increased conflicts in the future,” he told the annual gathering of business tycoons, academics and leaders from governments, intergovernmental and non-governmental organisations. "Population growth will make the problem worse. So will climate change. As the global economy grows, so will its thirst. Many more conflicts lie just over the horizon,” he warned.

Today's Water Day Observation in Brunei is part of the international observance of World Water Day which is an initiative that grew out of the 1992 United Nations Conference on Environment and Development (UNCED) in Rio de Janeiro. This year the day will highlight issues on sanitation in accordance with the International Year of Sanitation 2008 which the UN General Assembly declared with the goal to raise awareness and to accelerate progress towards the Millennium Development Goal (MDG) target to reduce by half the proportion of the 2.6 billion people without access to basic sanitation by 2015.