March 06, 2007
Whenever I drive down the Tutong-Kuala Belait highway (albeit the highway stops just before Telisai), I realised that the road linking Kuala Belait and Bandar Seri Begawan was built in my life time. It did not exist before 1961. If the road was not built, we would still be travelling from Kuala Belait to Pekan Brunei or Brunei Town via the beach. 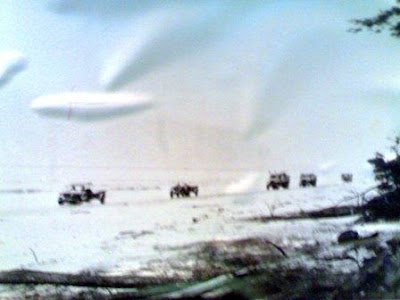 During the years before the road was built, cars from Kuala Belait and Seria would be travelling on the beach. These cars can only travel when the tide was low. This old Brunei Museum photograph shows a number of vehicles travelling along the beach. My dad told me a story about one time when they were travelling on a small bus, the driver took a gamble by driving near the water. The sand was firmer but he did not notice the strong waves on that day. One big wave washed over the bus and stopped the engine cold. Everyone rushed out of the bus and had to wait for help to arrive. Remember, in those days, there was no mobile telephone. Luckily my late grandmother had enough food while they had a long wait. 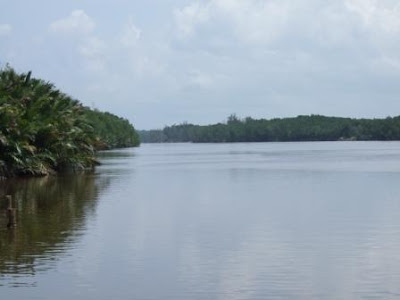 All of the vehicles would arrive at Danau. Danau was then a very important village. A number of cars would arrive there to take the ferry to go to Kuala Tutong at Kampung Penabai. From Kampung Penabai, there was the Tutong Road which goes all the way to Brunei Town. According to my father, travellers would stop at Danau and have a picnic. Most of the travellers would bringing with them meals prepared earlier or to use the Brunei word 'berbata'. There were two famous eateries in those days. Both eateries flanked the road leading to the ferry. Both are still in business today but no longer at Danau. One of them was CA Mohammad and the other was KK Koya - both famous names. The latter later reopened a small restaurant at Telisai and many of today's modern travellers would stop there too. 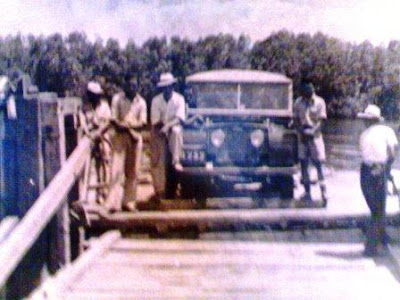 But most travellers cannot afford to eat out in the 1950s. So, they would be having their meals under trees or wherever they could find any shade while waiting for the ferry to arrive. And here's the thing, the ferry can only be used when the tide was high. The ferry was not motorised and can only accomodate two cars at most. It relied on a tugboat to pull it and manouver it into position. 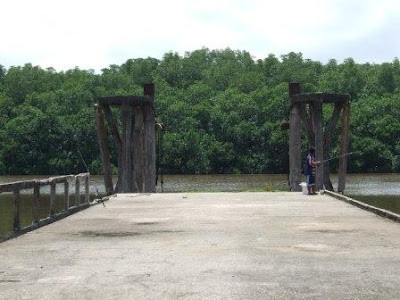 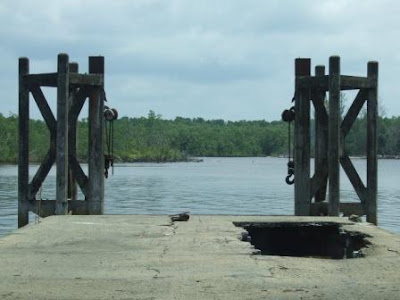 I managed to visit both the jetties at Danau and Kampung Penabai, Kuala Tutong to see the remnants of the jetties. At Danau, the jetty still looked alright. There was a date written on the jetty, it was built sometime January 1954. Prior to that date, the cars were let down right on the river bank. Unfortunately the remnants are not kept and judging by the state of the remnants at Kampung Penabai, pretty soon we will lose all trace of the jetties that marked the days when there was no road linking Brunei Town and Kuala Belait.
history old photographs tourism

Reza Faizal said…
My late grandfather always bring me to the Kuala Tutong jetty when I was small. He moved to Sengkarai, Tutong from Kampong Ayer 'cos he work at the jetty.
Tuesday, March 06, 2007 7:29:00 AM

Anonymous said…
Antoher interesting blog Mr. BR! I remembered my parents told me almost the same story as your described aboved whenever we passed our way to Tutong/Seria/KB. I also remembered that we used to have our picnic at Pantai everytime we went to Seria/KB and our car will be loaded with prepared food from home because that time these places are just like visiting another country! Travelling to KB that time took us almost 2hrs if I am not mistaken!
Tuesday, March 06, 2007 8:11:00 AM

Anonymous said…
No wonder there is a jetty at Penabai! I didnt know that it was used to transport cars from KB to Bandar!
Monday, October 13, 2014 3:55:00 PM