March 09, 2007
I was quite surprised to see a photo of me in the Pelita Brunei behind the Royal Family when Brunei scored against Cambodia in the first game of the Hassanal Bolkiah Trophy. Luckily it was taken a few seconds after my colleagues and I had literally jumped out of our seats to celebrate that goal. Unfortunately it was all downhill from there and I was saddened to hear that we did not make it to the semis at least. 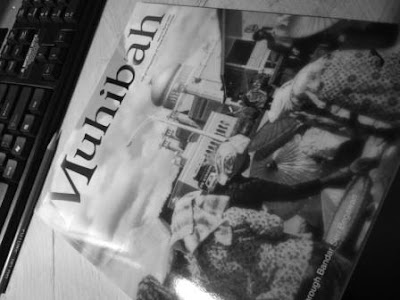 Nothing much today but I thought I will highlight the current Royal Brunei Airlines' magazine - Muhibah issue March/April 2007 which you will find in the pockets of every single Royal Brunei Airlines flights from 1st March 2007 until 30th April 2007. That's a 61 day window, so if you happen to fly, you are bound to see it. 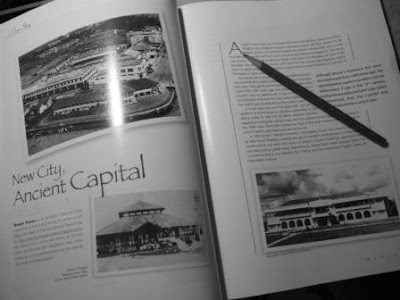 In it, you will find an 800 word article entitled "New City Ancient Capital" written by yours truly (yes, my name does appear in the article) about the progress of Bandar Seri Begawan as it progresses from a capital in the 15th century towards today's modern city. There are lots and lots of photographs of old Brunei but I think you have seen them all if you have been a faithful reader of this blogsite. The article is based on a few blogs I have written in the last few months.

You will be surprised to see too in the feature section of the magazine, two famous names in the blogging scene. There is another article written by Ahim Rani with lots of photographs taken by him when he was invited to be Brunei's representative of the Angkor Photography Festival at Seam Reap, Cambodia last year. 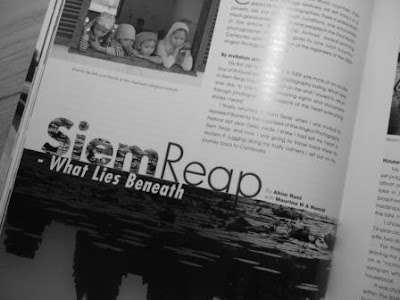 Beautifully taken photographs abound in the 5 pages article entitled " Siem Reap - What Lies Beneath". It shows Ahim Rani's ability to take wonderful photographs. Oh yes, I forgot to mention that other famous name - the article was beautifully written by Ahim Rani with Maurina H A Hamid (of the none other than that of turquoise and roses fame).

Unfortunately there is no price for this very valuable magazine. You can't buy it. The only way of getting one is for you to fly Royal Brunei Airlines. So, do that and you get the chance to read both articles written by people whom you know on-line. There is no other way of getting one - unless you get someone like my cousin and her RBA friend who kindly drop off a few copies to me last night - thanks guys!PS. Apologies to both Ahim Rani and Cuboiart as I earlier attributed cuboiart.blogspot.com to Ahim Rani. What was I thinking?
current affairs

BRUNEI resources said…
I hope you are not thinking what I think you are thinking.... or something like that!

Jasmin B said…
I immediately recognised the picture on the cover of the latest Muhibah on my flight to Jakarta as it was featured on your blog. It was a great read and so was Ahim Rani/Maurina's article. Read both articles 1st before reading the rest. Really love the fantastic pictures in both articles! I'm now a proud owner of 2 copies of this issue. (1 copy taken on my outbound flight & the 2nd on my return flight). Would've taken more!
Friday, March 09, 2007 10:03:00 PM

Anonymous said…
BR my man, CONGRATS for getting published AND translated!!! lovely articles too! :D

oh and thanks for giving me a mention! you beat me to it hehe. I've just picked up my copy today. Will post about it later! btw, congrats again!!

Anonymous said…
In a democratically-elected administration, you would get my strongest vote to become:
A. The Minister of Culture, Youth and Sports
B. The Minister of Industry and Primary Resources (Tourism major!)
C. The Minister of Finance (of course, next to impossible! :) )
Saturday, March 10, 2007 6:00:00 PM