The History of Brunei Oil 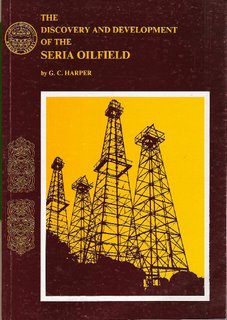 Last Sunday, I was pleasantly surprised to find this book on display at Solitude at the Mall. I remembered this book vaguely some 30 years ago when my father bought it from the publisher, Brunei Museums. I could not find the book at my parents' house anymore, someone either pinched it or we could not find it among the many things being stored at my parents' house. Sometime last week, I saw it again for the first time since, displayed with many books on Brunei at the ICC for the Raja Payung Negara Exhibition. An evil thought did cross my mind of pinching the book but the angel in me told me that I will be able to find it sooner or later. And et voila! Solitude had about a dozen of the books at only $10 each.

What's so great about 'The Discovery and Development of the Seria Oilfield' written by GC Harper? Well, first of all, this the only book in existence that I know of describing events about how the Seria oilfield (our country's lifeline) was discovered and the many developments to build up Seria up to about 1970s (the book was published in 1975 and reprinted in 1990). That said, there are many things we do not know about. For instance, did you know that oil was discovered in Miri first in 1910 and not in Seria? And that Shell first worked out of Miri to develop both the Miri and Seria oilfields? So there are a great many things we do not know about. Of course, cynics will say that this knowledge is not critical. I agree but knowing the past is fun especially for history buffs like me.

A number of new knowledge which I thought I will share with you all. The location of the first well to be drilled in Brunei specifically to produce oil was not in Seria. It was at Ayer Berkunci (around the Sungai Kebun Kampung Ayer area). It was not the 20th century but in the 19th century, albeit the last year of the 19th century - 1899. Why drill here? Oil prospectors in the 19th century already suspected that the Borneo island area had oil potential as there were many seepages (oil coming up to the surface) found in many areas. In Labuan, the search was on as early as 1866. Sometime in 1911, they started drilling in Labi and Bukit Puan in Belait. In 1923, they drilled in Tutong. But drilling continued in the Belait District until oil was discovered in Seria in 1929.

Seria was not called Seria then. The local name was Padang Berawa (Berawa is some sort of wild pigeon). Padang Berawa covers the area between Sungai Seria and Sungai Bera. And it was a swamp. The water in the area was dark red and and not suitable for human consumption. During rainy season, the whole area is submerged in water. But once oil was discovered, for some reason, the name Padang Berawa disappeared. The little river, Sungai Seria now provided the name, Seria to the newly developed town that was built for all the workers converging there.

How did they discovered the Seria oilfields? According to Salam, the Shell newspaper, a Mr. Mariott and Hon. Cochrane (later to become Lord Chochrane of Cults), both working for Sarawak Oilfields Ltd (SOL), in 1926 visited Kuala Belait which then consisted of a few fishermen's huts, on their way to visit a geologist somewhere in the Sungai Tali/Lumut area. On the way they stopped at Sungai Seria and while resting there, Cochrane smelled oil and discussed his hunch with the geologist and decided that the search for oil should be extended to the south (Seria) leading to the first well to be drilled in Seria in 1928. Oil was discovered in 1929 after the well had deepened to about 974 feet and you know the history of it since.

There are many more historical nuggets in the book. I suggest that if you want to find out more about the history of oil exploration in Brunei Darussalam, the development of Seria and other related aspects, buy the book. It's only $10 at Solitude.

p o t a t o said…
I remember a teacher telling the story of how oil was found. "The place smells like oil".

Aaron John said…
I actually went to Solitude on Tuesday night and to the Exhibition on Friday afternoon. I think I saw this book close to the Solitude's entrance. Since I was there to buy a different type of books, I didn't bother to give it a look.

Somehow I tend to read more on world history especially that of Western countries. Although I know I should be reading more on my own country's history. Howard Zinn's A People's History of the United States is one of my favourites.

A book on the history of Brunei oil would be interesting. Especially since I'm currently doing a bit of a personal research on the geopolitics of oil. I hope Mr BR will continue to post more comments on other books in the future. On that note, may I recommend to BR readers John Perkins' Confessions of an Economic Hitman. I think it's a good book, revealing the Western countries' (especially the US) economic imperialism.
Thursday, August 17, 2006 9:56:00 AM

m o g L i e said…
1929 is the year when my dad was born so it's synonymous to 1st oil discovery in Seria !! My dad used to refer the Company back then as "BMP" and was also around when "BSP" was formed. Your posting simply reminds me of my old days at Seria ... the good old feeling is still there ... it just reignites the memorable childhood days that I used to cherish to current day .... btw the BSP camp I was brought up is no longer there but the very spot still exists albeit with greenies instead ...
Thursday, August 17, 2006 11:27:00 PM

chinadoctor said…
Hi. Do you know about “ English teacher in Shanghai”
There is have a blog called Sex in Shanghai in which a Western guy tells about all his exploits with Chinese women here in Shanghai. (That blog is still #1 on the “hottest blogs” list on the CBL, but it now seems to be inaccessible.) Since then, the Chinese have found out about the blog, and they are (understandably) pissed.