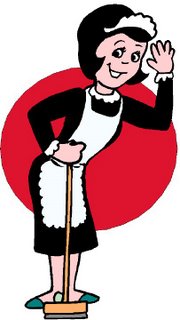 I am still at home. I should be in the office but I am bent almost in half everytime I try to stand up. I must have a trillion invaders in my tummy giving me the mother of all tummy aches since 3 this morning. But I am unbowed and will attempt to write today's blogs. How's that for sacrifice to fulfilling a daily blog? I must be off my head...

Through the miracles of modern technology namely the internet wireless I have at home, I am still able to type and post this even though I am crumpled up in bed. I was just listening to one of the daily articles on Radio Nasional, my current companion. The commentator was talking about the state of our Brunei families viz a viz with the housemaid. How the existence of the housemaid has turned Brunei's world upside down, children no longer able to help their parents, young girls not knowing how to cook, children talking with the accent of their housemaids etc.

When did the housemaid phenomenon arrive in Brunei? That I was not so sure. My own family started having a Filipino maid around 1980, if I am not mistaken and that was 26 years ago. According to Philippines' records, it became part of that country's policy to export labour, at first due to the high demand for foreign workers badly needed to implement ambitious economic programs in the host countries. In the 1970s, the Middle East provided a vast market for Filipino workers complemented by the increasing demand for service workers in Europe, Canada, Hong Kong and Singapore. Then the Asian economic boom of the late 1980s and 1990s attracted hundreds of thousands of workers.

In Brunei, in 1984, when the government revised drastically (up to 30+% increase) the salaries of government officers and staff, many government servants were suddenly able to afford maids, even among the ancilliary staff with a basic pay of $500. Since maids' salaries are around $200, they still have a balance of $300, so a maid is still affordable. With revises in allowances since 1984 (which most civil servants conveniently forget whenever they cite that their salaries have not been revised), first with the elaun kurnia khas of $150, $170 and $200 (revised twice), then later with the elaun sara hidup of $80, $100, $140 and $170 (revised), and the introduction of EB Khas, many civil servants no matter how lowly their basic salary is but with all the allowances, they can certainly afford maids.

So we have an interesting situation. One third of Brunei's total workforce are foreigners (50,000+). It leads of course to the number of phenomenon described in the radio article. Of course there are two sides to every coin. It does allow for both male and female to enter into the workforce. Prior to that, most of the people in my generation hardly have both father and mother working. Our mothers tend to be full time mothers and working mothers were the exceptions then and not the norm as today. It does allow for greater mobility - new families with new homes away from the parents very much younger. It does provide for much more luxury time - that is time to do other things and not do household chores especially for the females of the house. All in all, it does lead to a much bigger economic development and gain even if we take away the drain in the country's liquidity towards paying wages to the foreign workers which get exported.

There is therefore a good side to having housemaids despite the bad side raised by the radio article. The question becomes much more of how we balance the two. I guess I will stop my ramblings. It's hurting like crazy now.

Anonymous said…
As a senior government officer, Do you think, if ever in the future, that the situation will be the other way around? i.e. bruneian going abroad to work as labours and maids.

This was the conversation I had the other day with few people. Could you share your thoughts on this?
Saturday, August 05, 2006 2:15:00 PM

Anonymous said…
My concern would be whether we could have some kind of alternative to the present arrangement i.e. a live-in housemaid basically carrying out the nitty-gritty bits of our wifely / maternal duties.

Anonymous said…
The problem of having housmaid as I see it is the prevalent influence they have over the children. Children develop and absorb early on when they are young. Imagine the housemaid have a 'bad trait' and the children learn and take up on this. Have we ever wonder why children grows up differently from the parents? The thought of this scares me. What can we do to minimise this? I know quite a few families, that their children are always with the maids 24/7 from eating, bathing, changing the diapers and so forth. Are we going to end up like the children i.e. we are going to be taken care by maids once we are not able? Do we want that? Think about it. Having a maid is alright to have, helping around the house, but to be the mother of our children, the way I see it, is a no no.
Saturday, August 05, 2006 9:09:00 PM

Anonymous said…
have you ever felt sorry for the maids here in brunei?
i was just wondering that the maids here are being wokred too much but are never paid enough...they work much more longer hours and doing hard work around the house and all that...i personally think that it is unfair...maybe the government should introduce a minimum wage for the foreign workers?
Monday, August 07, 2006 2:28:00 AM

Anonymous said…
I dont know wether this is true or not but if Im not mistaken, we have minimum wage rule for foreigners but (probably) not enforced by Buruh. Furthermore the supply of labour is a lot and if some foreign workers refuse to work unless minimum wage is paid, there are thousand more wants to work at a cheaper pay. The problem with Over-Supply.
Yeah its very dis-heartening to see the maid work almost 24hrs a day. But sometime we cant help it. Its the way of life that they have to work in that kind of condition. As I mention before, if they refuse to work with that kind of hours, they are some other people who are willing to work the time as stipulated by the employer. Its a matter of choice. Really. Its a reality of modern slavery. Thats how I see it anyway.
Monday, August 07, 2006 1:34:00 PM

Anonymous said…
I have a hypothesis, the increase of people gaining weight and the rise of obesity in Brunei is related to when people were able to start affording having a housemaid. What say you?
Tuesday, August 08, 2006 8:50:00 AM

p o t a t o said…
The drastic fall in JP's popularity, the mushrooming of restaurants that serve more fat than vegetables, the culture of spectatorship rather than play-the-sport-itself, the cheap Health services, the Weekend routine where people jog at Shahbandar for an hour, but after that hit the Nasi Katok shops, the TV-watching rather than fitness-sessions preference AND the housemaids. These are few of the reasons why obesity is on the rise.
Friday, August 18, 2006 9:38:00 AM

Have you wonder what will be a Bruneian Engineer, doctors etc might earn if he work outside Brunei? Have you also wonder how much the expat engineer, doctors etc are earning while working in Brunei? Both may have the same experience and skills but for sure the Bruneian will get less. In reality, we already have our own cheap labour and it's happening right in our own back yard.
Monday, August 21, 2006 2:19:00 AM