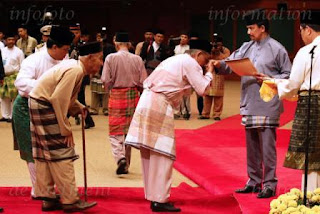 Yesterday's ceremony when His Majesty handed out the zakat funds to those who are needy certainly marks a new chapter in Brunei's history.

I was sitting on the stage watching from the back seeing the faces of all those receiving the zakat funds. Certainly a number of them deserved to receive the funds. A number of them were in wheel chairs and a number of them too had difficulty walking. Regardless of appearances, I am sure that whoever assessed their needs must have taken into account whatever difficulties that they faced.

Yesterday, about 4,084 heads of families received the zakat funds who are considered asnaf fakir miskin (the poor and needy) and among them are 190 people asnaf al-gharimin (those who are in debt). The 190 people are mostly those who cannot pay their housing debts. About $2.3 million of unpaid housing loans have been paid up through the zakat funds.

For the poor and needy, each head of family yesterday received $20,000 each and members of the family received $10,000 each. They do not receive the money in one lump sum, instead depending on the amount, the banks where their funds are kept will disburse the money over a period of 36 months, 48 months or 60 months.

Not all the Religious Council funds have been used up. Some money have been kept aside. The Islamic Religious Council kept aside $67 million for other committments which include committment for the committee for building houses for the poor which my PMO colleague and I co-chair which will receive $35 million plus another $3.6 million for the Empowering the Poor Program (Program Pengupayaan Fakir Miskin).

His Majesty had only one wish - to eradicate poverty and in his titah yesterday had hoped for the eradication of poverty. But he also advised both the implementers and receivers, for the implementers to go out and reach out and not wait for applicants to come and for the receivers, his advise was that the recepients should utilise their funds wisely and purposefully, by avoiding an extravagant and wasteful lifestyle as they are meant to help them provide for a better and more comfortable life and that they are no longer labeled as Fakir Miskin.

His Majesty also noted that he hoped that among those who received the funds will no longer want to look back, but with new-found determined ambitions, as well as with wise planning, they can continue to prosper without requiring the support of Zakat in the future.

The Zakat funds had funded monthly assistance program all this while. However the amount outstanding in the Zakat funds are quite large as it included about $98 million of dividends from investments. The funds were kept aside for many categories which included muallaf, amil, ibn u sabil etc. However there were not many recipients of other categories and those funds kept aside plus the dividends are the ones now funding the recipients. Up to 31st July 2009, the Islamic Religious Council are paying out about 2,313 people in Brunei Muara District, 573 in Tutong, 749 in Belait and 259 in Temburong.