October 29, 2009
According to The Washington Post compiling news from Indian newspapers on 26th October 2009, amongst them The Indian Express, Royal Brunei Airlines will finally be acquiring her Boeing 777.

Remember the continuing saga about Boeing 777? About 2 years ago, RBA was supposed to have leased a couple of Boeing 777. Brunei Times in its 18th June 2007 news wrote that "... reports on the internet (airlinersgallery.com) have stated that the airline has already acquired its first Boeing 777-200 last month. According to the report, a Boeing 777 has been repainted in full RBA livery from American flag carrier United Airlines, which is awaiting delivery at Fort Worth Alliance Airport in Texas. Royal Brunei Airlines (RBA) is also looking into expanding its fleet, with the new Boeing 787 Dreamliner touted as one of the possible future choices ..." The photograph of that Boeing was this:- 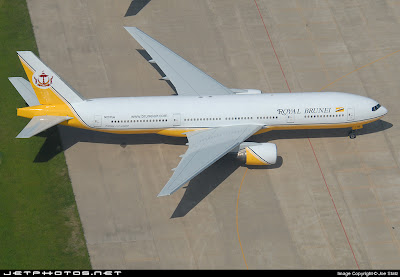 Anyway, despite the training and retraining of pilots, the planes still did not appear. Now The Indian Express reported "... as Air India's woes multiply on account of deliveries of new aircraft which it now wants to trim, help may come from an unexpected quarter — from the Sultan of Brunei. Orders for six Boeing aircraft which the airline wanted to scrap, and Boeing remained adamant on having it delivered, may now find a taker in the Brunei royal palace..."

"... Senior officials told The Indian Express that the Brunei Sultan, Hassanal Bolkiah Mu'izzaddin Waddaulah, has expressed interest in taking on dry lease at least two-three of these aircraft — Boeing 777s — for his oil-rich country's national airline, Royal Brunei. The airline, which operates a fleet of six Boeing B767-300s, two Airbus A320s and two Airbus A319s, has been adding aircraft to its fleet over the past few years ..."

I really hope that the planes arrived soon. Our RBA's 767s are just too old and the Airbuses too small. Maybe we can get some decent airline seats soon.