October 22, 2009
There seemed to be a rush of entries yesterday about the development in Brunei. For today I thought I will look at the Chinese Temple. I wrote about the old Chinese Temple a couple of years back and received interesting comments. The original Chinese Temple is not at its location in front of Sungai Kianggeh. It was originally at the wharf. During the early 1950s, you can still find the old temple in between the Customs Building and the old Government Rest House (that Rest House became the Pelita Brunei office in the 1970s and 1980s and now completely demolished). 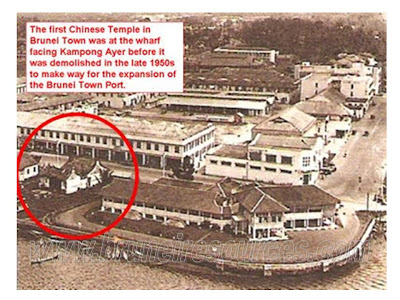 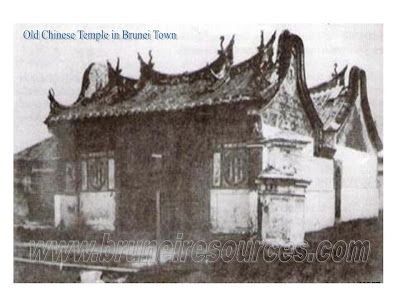 KH added this comment - "After the temple was built, a plaque was put up with the list of people who donated towards the construction. The plaque was made of wood, roughly 3 foot high and 8 foot wide and inscribed with the names of donors and the amount of their largesse in Chinese and cut into the wood with a blade. Years later, apparently there was a bitter dispute and someone took a saw an cut away a chunk of the plaque. The plaque is now tucked away in a quiet corner of the current temple.

The second story is that the temple was the only large building standing after the bombardments of Brunei Town in World War 2, first by the Japanese and Allies. My uncle remembers after the second bombing people were amused to find an unexploded bomb in the temple courtyard."

This is a photograph of the surviving Chinese Temple in the background after the aftermath of the Allied Forces bombing during the Second World War. 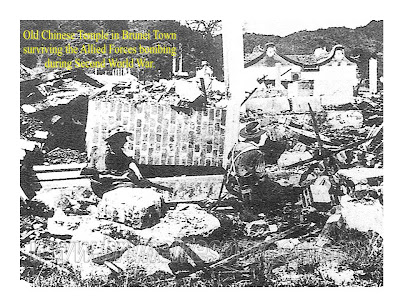 In the 1960s, the newly relocated temple was at Jalan Kianggeh. This is one of the earliest postcards showing that new temple:- 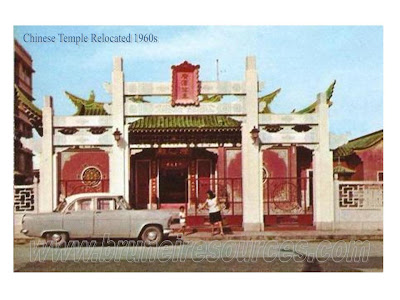 Anonymous said…
thanks for the post! i've been telling people that the current temple survived the 2nd world war, now i know is the wrong one.
Monday, November 02, 2009 10:32:00 PM