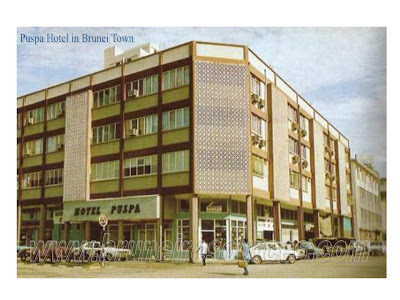 The winner of Saturday's post of what happened to this hotel is my good friend, Mr. Haji Awang. Unfortunately he only texted me so his note was not available to readers.

You have to remember that the hotel was actually next door to the wet market (now the Bumiputera Building with the Municipal Council office on top of the multistorey carpark). And this place was more or less the central place to be. The bus terminal is still where it is now except now there is a multistorey carpark on top of it. The RBA Office was somewhere at the back of the Britannia Building.

Puspa Hotel lasted until the late 1970s when the lease on the land ran out. Normally leases are continued with the payment of a premium but in this particular instance, it was not. So the hotel was acquired by the authorities and converted into a government rest house. There was only Brunei Hotel which was in town then and probably Ang's Hotel (now Terrace Hotel) which were operating at that time. Sheraton was built around the 1980s.

Around the early 1990s, there was a move by the Municipal Council to lease out the hotel to the private sector. But that was not to be. The last few years saw the lobby of the hotel converted into a Job Centre (Pusat Pekerjaan) and run by the Labour Department. I am not exactly sure what happened to all the bedrooms whether they are still being used or being converted into offices as well.

Anonymous said…
There's another hotel operating during that time. It's Capital Hostel. This establishment is located at Kg Berangan, behind Pusat Belia, and is still in operation.

Besides the Hotel, there're a number of famous business establishments in this building such as coffee shop, tailor, restaurent, barber, salon, coffee house, sundry shops, etc... SOme of these business establshment are still around.
Monday, October 26, 2009 5:31:00 PM

View from NY said…
Dear BR,
Indeed, besides the Hotel Puspa there were a few businesses in the building including 2 well-known Chinese restuarants: on the ground floor facing the wet market was "7-Up Cafeteria" and on the first level was the "Lucky Restaurant". Both of them eventually moved to the same row of shop in Seri Complex after their leases were returned to the Municipal Authority.
"Lucky" is still in business and many of their loyal patrons dated from the Hotel Puspa days.
In the dingy alley between the Hotel Puspa and Brunei Hotel, there was a Chinese barber shop.
If I remember correctly, the lobby/reception of Hotel Puspa used to be on the first floor. The hotel had only about 30 rooms. It was neither large nor luxurious.
When the building was turned into the Government Resthouse the lobby moved to the ground level.
There must be other businesses in that building but I do not remember.
Monday, October 26, 2009 9:53:00 PM